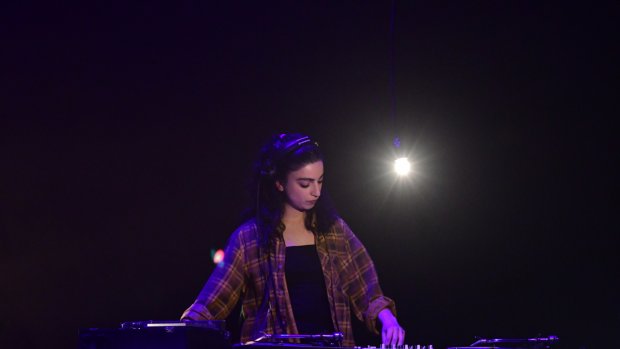 In the fourth installment of composer Alex Ho's curated series on transnational identiy in new music, we hear from composer Shiva Feshareki.

In this blog, I aim to show how my transnational and multicultural background helps me to explore perspective in my music with fluidity and depth, leading to new sonic discoveries and philosophies. Being one of very few non-western families growing up in my area, I now feel able to throw myself into new situations in which I don’t comfortably fit. Combining this with my multicultural upbringing, I am able to successfully integrate a variety of models of thinking, creative process, and collaboration where I can be an outsider to a music culture or discipline, and navigate accordingly. And sure enough, I created my own path, moving in a continuous state of intersection between different creative cultures and artistic values, learning new ideas and processes from different modes of culture and people, and constantly broadening my perspective as a consequence. Never static nor stagnant, I move in active collaboration, and directly explore this in the sonic choices I present in my compositions. Because of this, I have a very broad grasp of attitudes and values between scenes and cultures both on a social and an artistic level, which has been incredibly insightful and enriching for my music.

My focus on sonic movement, space, and interconnection of sound with wider physical phenomena is a constant exploration in my electro-acoustic compositions. I aim to create heightened listening experiences and to broaden the perspective of the listener through physical and spatial means. This is prevalent in my compositions, ‘GABA-analogue or O’ and ‘Opus Infinity’. The audience literally enter these compositions to be surrounded by music, receiving their own version of the composition depending on the angles and perspectives of where they stand in the space. In my live electronics and turntable performances, I recycle and re-interpret sound as material, manipulating it with tactile motion - almost like choreography - between myself and spinning circles, transforming sonic material into new dimensions and perspectives of infinite proportion. In this instance, I treat sound as kinetic motion which has the power to transform perspective.

I also treat vinyl discs as subject matters for experiments in perspective. For example, in ‘Liquid Pyramid’ the only source material is previously created music such as Commodore’s funk/soul song ‘Janet’, which I transform into something new, using nothing but itself.

With ‘Opus Infinity’ — my spatial composition for Live Electronics (Turntables), Amplified Ensemble and Bespoke Soundsystem — which was first performed by myself and Ensemble Modern at Frankfurt Lab on the 29th February 2020, I included a wide variety of practices in its multidimensional process to create new possibilities never before explored. Its foundations are based on physics, mathematics, architecture and design, as one with live electronic and acoustic sound. Inspired by my Persian heritage, sacred geometry took centre stage in my thinking, so I designed the composition as a piece of liquid, geometric architecture. The piece demonstrates the interconnection of sound with the naturally occurring patterns of the universe. The audience enter the spatial arrangement based on mathematical patterns of the infinite, thereby becoming part of an immersive performance: a dynamic sound sculpture which fills the entire space from all angles.

I have always been intrigued by the idea of music as physical. Once you realise that sound is interconnected with all other existential phenomena, you no longer see it as a separate force, nor find neurological overlaps such as synaesthesia such a surprise. This multidimensional and intersectional attitude is needed in our everyday lives more than ever before, because it is our existential reality which we have collectively neglected. When I create music, I am always exploring both the psychology of sound, as well as the physicality of sound. And then this psychology - how we internally perceive sound, is interconnected with its physical construction. Music isn’t just overlapping with other senses or other physical elements, it is physics, it is architecture, it is nature, it is geometry, it is spirituality... In the same way that science is mysticism, and poetry is mathematics, we need to embrace multidimensional thinking. This is why I have dedicated my life to exploring these interconnections in my music, and I think about my compositions as multidisciplinary explorations of perspective.

Experimentalism is also a huge part of my creative life, and having different cultural perspectives growing up, I’m able to reach for wider experimental explorations. I’ve never been stuck in a rut or been included in an in-group or bubble, however much the comfort of the bubble can feed your sense of worth but it is only ever on an ego level; something I try to relinquish to get to the depth of my sound. This experimentalism is why both my compositions and career itself are intersectional, constantly reforming my perspective and modes of explorations. I am grateful for my learned ability to be experimental because it is an urgent need of our time.

I have been saying this repeatedly for a few years now and during these times that we live in, it is more important than ever to state: We need Art to expand our thinking and open our minds to learning new things, by broadening our perspectives to form our own individual opinions for our own freedom of mind and existential connections. We have so much to learn from the unknown, from people different to us, with different attitudes, different values, and music can allow that expansion and existential interconnection: The universe lives through vibration, so music is a source to true knowledge if treated as sacred. This is what being an experimental musician is about: to feel this responsibility beyond the music itself.

Shiva Feshareki recycles her entire back catalog on ‘Vapour’

She was honoured with the 2017 British Composer Award for Innovation from The Ivors Academy, The Royal Philharmonic Society Composition Prize (2009), as well as the BBC Young Composer’s Award (2004) with her first scored composition. A host of stunning performances followed including most recently at Casa Del Lago (Mexico), the Moscow Museum of Modern Art (VAC), BBC Proms, London Jazz Festival, and as Featured Artist at Spitalfields Festival.