"The thing is that new music can be and mean all sorts of things, and shouldn't be thought of as ‘specialist’ in general..." 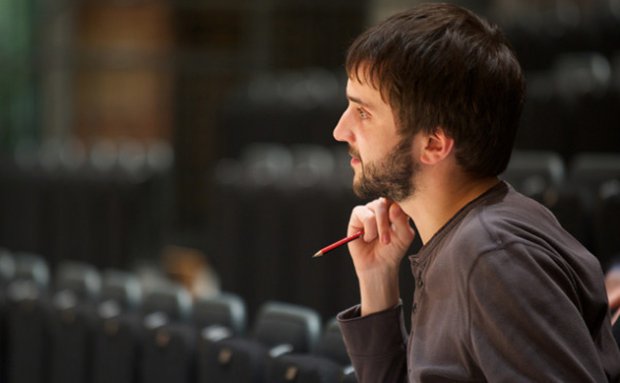 Matthew Kaner studied with Julian Anderson at the Guildhall School of Music & Drama, where he is now himself a member of professorial staff. He has been commissioned by ensembles including the LSO, London Sinfonietta and Philharmonia, and his music has been performed in prestigious venues including Seiji Ozawa Hall, the Barbican, the Royal Festival Hall and the Purcell Room. It has also featured on BBC Radio 3 and NTS Live and in the Aldeburgh, City of London and Victoria International Arts Festivals. Matthew was a fellow at Tanglewood in 2012, and won the Royal Philharmonic Society Composition Prize in 2013.

Last year, you completed a fast paced Embedded residency with BBC Radio 3 – what was your highlight?

It's difficult to choose just one – there were so many amazing moments. Perhaps the main one was going to the studio to record my pieces so soon after I'd written them. It's so unusual and thrilling to hear a work you've written performed and recorded by such fantastic musicians within what was often just a week.

What have you been doing since the residency finished?

I'm just finishing a large orchestra piece for Lucerne Festival Academy Orchestra. It's been a project that started in 2015 and has been a huge amount of work. I also wrote a short work for violin and orchestra a little while ago for Benjamin Baker, one of the brilliant violinists I met during my Radio 3 Embedded residency. I teach composition at the Guildhall School of Music & Drama too, so I’ve had a pretty busy schedule.

The project attempted to demystify ‘new music’ for radio listeners. How would you describe new music?

The thing is that new music can be and mean all sorts of things, and shouldn't be thought of as ‘specialist’ in general. I hope that during my residency I gave Radio 3 listeners a sense of the diversity of new music and the incredibly broad range of styles, characters, moods that it covers and evokes.

What was your route into composing? Could you imagine doing anything else?

Looking back, I realise that I started writing music at a very young age, but I don't think I really became serious about wanting to do it professionally until I was about 17. Even then, it took years of study at university and music college, lots of development opportunities (Tanglewood, the LSO’s Panufnik Scheme, courses at Aldeburgh and so on), plus much support and guidance from older composers to reach where I am today. I do sometimes find it exhausting (especially when things are really busy and I feel under pressure), as it can be highly demanding mentally and emotionally. Regardless of the ups and downs, though, I do feel very fortunate to be able to do what I love, and always find composing incredibly fulfilling in the end. So I guess the answer is no – I can't imagine doing anything else!

What is the new music scene like where you live?

I live in Hackney is East London, which is a pretty vibrant place in terms of the arts in general. I'm 20 minutes cycle away from the Barbican Centre, and there are some great venues much closer, such as St John at Hackney (where Radio 3 often hosts their Open Ear series). Who are you listening to right now? Right this moment I'm actually listening to some Ravel, but this is the first time in a little while! I guess I'm most excited about what Hans Abrahamsen and Jürg Frey are doing at the moment; though very different, I love the exquisite clarity of both of their recent outputs. Anything Shabaka Hutchings releases (with Sons of Kemet, the Comet is Coming etc.) is usually high up on my Spotify playlist too.

Ah, that's a difficult question to answer without getting into trouble! I don't really like to talk about politics in relation to my work, but I think it's safe to say that all artists are facing challenges these days in terms of funding and the overall status of culture and arts education in our society. Having said that some of the greatest art in history was made during politically difficult or unstable periods, so perhaps there's cause for hope. Great organisations like the BBC, Sound and Music, and many of the UK’s performing groups and orchestras are still steadfastly committed to commissioning new work too.

That's such a tough question – there’s a huge list of names I could give you! If dead artists could also be included I’d have probably said Billie Holiday – for me she was the most beautiful voice and soul ever to perform in music, and it would have been such a privilege just to write one single song for her to sing. Amongst living artists, again, I’d love to work with Shabaka Hutchings, but there are loads of orchestras and contemporary music groups, as well as early music performing groups, like the OAE and the Sixteen, but that only really scratches the surface!

Doing DIY! I love making things – my dad is a furniture restorer and my mum an artist, so I think the creative urge is in my blood. If I'm not at home I'm usually out walking or running on Hackney Marshes, or on my bike cycling up the river Lee, heading north out of East London and enjoying the incredible views of nature. Do you think the word composer adequately reflects you an artist? If not, what word does? Yes, pretty much. I used to prefer to think of myself as a ‘creative musician’ when I was younger but I care a bit less about that sort of thing these days.