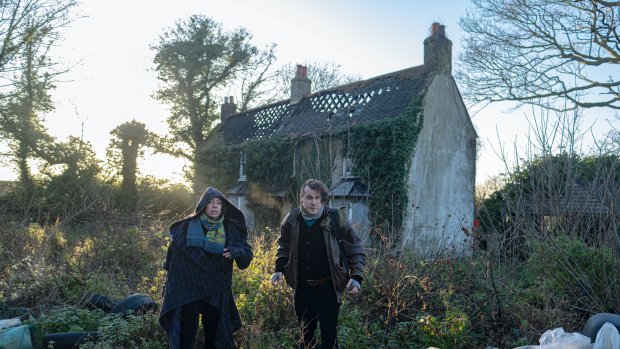 Discover ‘Now the Time’ a new work by Lunatraktors, created as part of the LGBTQ+ Composers Open Call.

In partnership with the LGBTQ+ Music Study Group, we are delighted to share ‘Now the Time’, a new project by folk duo Lunatraktors.

Lunatraktors is a collaboration between choreographer and percussionist Carli Jefferson, and nonbinary vocalist and composer Clair Le Couteur. Their 'broken folk' sound strips trad folk back to rhythm and voice, while Clair's overtone techniques and four octave range combine with the hybrid of tap and body percussion.

An original work composed in the folk tradition, ‘Now the Time’ is an act of mourning for silenced voices and stories, attempting to transform erasure and violence into acceptance, transcendence and power.

‘Now the Time’ was created earlier this year as part of a nationwide open call for new sonic works celebrating queer histories, sounds and stories on the British Music Collection - read more about the other works selected here and discover more about Lunatraktors here. The full video is available to watch online below.

Lunatraktors - Now the Time (Performed and recorded at the Theatre Royal, Margate, 2021).

Hi Clair and Carli, can you start by telling us a bit about yourselves? How did you start to make music together and what are your inspirations and influences?

We met in a bar in Prague in 2013. Clair was recording a song about werewolves and asked Carli to record some tap dance for it – she ended up doing percussion for the whole record. We used to practice walking around on the street, singing and clapping and drumming on things. That's the root of what we do – body and voice. Then Carli went to Mexico, Clair went to London to do a PhD, got married and divorced and came out as trans. Clair decided to start a folk band and got in touch with Carli, and we moved to Margate to live together and start Lunatraktors in 2017!

Like a lot of your work, ‘Now the Time’ is composed in the folk tradition but it strikes me as an inherently political and contemporary piece of music because as you say “it addresses the gaps in the folk music archive where queer, trans and disabled voices should be”. Can you tell us more about your approach to making it and the stories you wanted to tell through it?

It's a song that came to Clair in the shower, like a memory. Carli would call it a download from the spirit realm, and it definitely felt received rather than written. Almost a kind of past-life experience. Clair was studying flamenco and reading a lot about folk heritage and queer/trans history, thinking about how difficult it is to find those experiences in the archive because they're either obscured, rewritten or just removed. The song is about the process of being erased, first socially and then through violence, but transforming that, seizing control of the story.

Queer performers also go through a process of erasure, both while they're living under oppression and then after they pass away. Their queerness is rewritten as an illness, an addiction, a tragic flaw, a shameful secret, rather than the heart and soul of everything they wrote – George Michael comes to mind here. Instead of a figure of liberation, we so easily become another fairytale of the fatal consequences of queerness, of stepping out of line. We're very inspired by Music Hall / Vaudeville as well, and so many of those performances were drag – cross-gendered megastars stars like Vesta Tilley. In a way, Now the Time is about how our culture is haunted by the stories it represses. The empty Theatre Royal – a crumbling 18th century building with the 'lucky' lipstick marks of dozens of young girls on the backstage toilet wall – felt like the perfect backdrop.

The funny thing is that folk music is always contemporary; they're pop songs from the past. The majority of English folk songs were about political events of the day, personal experience, or came from stage shows – so many 'traditionals' started life in Georgian musicals. We don't see any conflict between folk, contemporary and political as categories. All the old folk songs about men impregnating and abandoning young women are intensely political. If you tell your story, and your story has happened to a lot of other people, that immediately identifies an oppressed class rather than simple personal misfortune.

That's also why it's important the song is in 10/8 time. Lots of English traditional songs are in a five, but it's somehow considered this "difficult" measure. You barely ever hear a three on the radio in Britain. Everything is four beats to the bar plod plod plod plod. There's so much more out there!

For us, it's all about colonial dualism; this mental virus that insists on cutting everything into two 'opposite' stereotypes. It's the same mechanism behind bisexual erasure: the all-too-common belief that you're either straight or gay, or at least that you should choose one or the other. It's no surprise really that the current culture war has come down to which toilet people are allowed to use: pink door or blue door.

Quite early on in the process, we had a brilliant conversation about archives and collections (in the context of the BMC but also more widely) in particular around representation and whose histories, sounds and stories get preserved and shared with people, and who stays forgotten about in storage. I wondered whether these questions are still on your minds and if/how they eventually informed this commission?

These questions are the whole basis of what we do! The problems of dualism and erasure are naturally a feature of archives: who and what gets included on a 150 word label? Does the British Museum label about the frieze of mighty Kaineus mention that he started life as female, and that's why he's being buried with rocks by the centaurs? (It doesn't.) It's all about categories and real estate: what is allowed to take up space. The echo chamber of what the institution thinks people want to hear; what it feels uncomfortable expressing. That's why giving voice to stories that don't fit the mould is so vital; channeling and embodying other possibilities, tapping into those wells of grief and repression. Building new communities based on shared experiences, shared hauntings.

You were commissioned to make this work as part of a specific open call for LGBTQ+ composers and music-creators. Beyond ‘Now the Time’ how do your queer identities influence your musical outputs? And how important are celebrations like Pride and LGBTQ+ History Month to you and the work you create together?

Queerness is the centre. We perform at folk festivals, theatres, galleries, museums, but we're most at home at queer cabaret / performance art nights; that's where we've found our voice, where the audiences get us, where all the parts of what we do resonate together. Amy Zing (founder of legendary genderqueer club night Sink the Pink) is the mother of Margate Pride, and actually that was a big factor in our decision to move here and start Lunatraktors. There's an amazing queer community in Margate, very different from the corporate-sponsored stereotypical Gay Pride stuff. Margate Pride is about solidarity: ethnic diversity, class diversity, bodily diversity, neuro diversity. Really celebrating difference as beautiful, not trying to make another repressive counterculture, like the white cis gay men trying to push trans people out of the room now they've got some social power for themselves. We need fluidity, weirdness, experimentation: not straight, gay or lesbian bars where everyone dresses and acts the same or you get dirty looks. A lot of what we do is about processing and overcoming shame, shifting the weight of that, becoming joyful, and that's actually what makes our work universal – we have fans of all sorts from 3 to 93 years old.

What are the changes you’d like to see for LGBTQ+ people making folk music, or the music scene more widely?

We'd like to see more people pushing back against (trans)misogyny, all the coercion, manipulation and bullying behind the scenes - so often masked as 'just a friendly word of warning...' We want more people supported for being transparent about what they're experiencing, financially, personally and bodily. We want to normalise the willingness to speak up and say no. You want us to play this festival for free? No thanks. You want us to modify our behaviour or message, just tone it down a bit? No thanks. You want us to keep this abusive behaviour just between us? No thanks. Openness and solidarity are the only solutions; the only way to turn our personal experience of being shamed into public shaming of the power-hungry abusers bleeding everyone dry.

We're working on lots of heritage commissions right now, composing music and making performance for camera about Anglo-Saxon female saints, bronze age hoards, ancient copper mines, steam-powered textile mills. We love to help people brush the dust off history and feel its intensity; not always the easiest thing to experience looking at things in glass cases. Sound can let us access cultural heritage in a meaningful way without having to wade through a lecture first. We want to make experiences that give people the urge to look deeper, to dive into the historical detail, to delve into the facts and figures, and ultimately ask questions about the bigger picture.

You can find Lunatraktors on Twitter or Instagram. Their new album The Missing Star was released earlier this year and is available on Bandcamp.