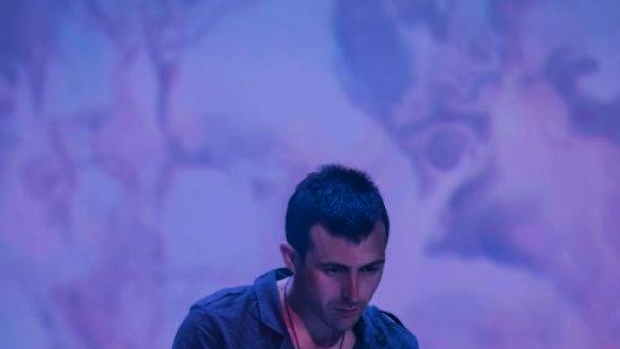 Joel Cahen from CMMAS on Embedded

"There is a real threshold between private and public spaces and the individual sense in them, which I find a great setting to sonify."
New Voices

After travelling all the way to Mexico for his Embedded residency with Centro Mexicano para la Música y las Artes Sonora and Huddersfield University, Joel Cahen began working on a new project that “integrates game engines with locative technologies for the purpose of creating an interface for performance, composition and listening”. Amongst his many other innovations in new music (which he reveals the fascinating details of within), Cahen also discusses his personal music philosophies that focus closely on the perception of sound, a notion he thoroughly investigates in his installations in swimming pools, for example! His work is closely involved with artistic and developmental progress in education and ‘special schools,’ exemplifying the multi-faceted aspects of Cahen’s musical innovations. Read on for more…

A statement that summarises all facets of your music reads…

As George Clinton once said: Nothing is good unless you play with it.

The residency was an opportunity to embark on a new project which integrates game engines with locative technologies for the purpose of creating an interface for performance, composition and listening. I’ve been learning new software and technologies and expanded what the idea for this project can be.

What’s the contemporary music scene like in Morelia, Mexico?

CMMAS is a very interesting centre which is based in electroacoustic music and sound experimentations. The festival they put on once a year attracts the most diverse audiences I’ve seen for multi-channel electro-acoustic concerts. People of all ages – families, teens – fill up an auditorium. I wish the UK public had this kind of exposure and interest in electroacoustic music.

What kind of things have you been working on? Can you tell us about your projects?

Aside from sound work I do for other artists, I have a few projects I am working on and they are constantly evolving.

Wet Sounds, is a sound performance in a swimming pool, often with special lighting and sometimes with video projections and performances on and below the water surface. These days it is an 8 channel piece over a vertical dispersion, 6 channels above the water and 2 channels below to which I create an abstract electronic live composition. I have toured with it around the UK four times and around Europe and also invited other artists to play, most notably Pierre Henry, Nurse With Wound, Cluster and many others.

Scrap Club, is a public ‘destructivist’ activity where the audience smash various household items as well as industrial-grade stuff using sledgehammers. I co-founded it with Wajid Yaseen, and since 2007 we have done 18 of them. It’s a cathartic and thought provoking activity that never ceases to excite and inspire discussion on the nature of destruction and the human-object relationship.

Interzone Theatre, is an audio-based augmented reality geo-locative platform for sonic fictions written in and for a walk in, usually, an urban setting such as streets and parks. I have included covert performers who accompany the audience member as s/he walks with headphones in the streets. The possibilities for this platform are far from being exhausted. I really enjoy extracting the music and stories from the environment it is set in. Aside from urban walks, there has been Teffradot, an opera written for it by Rebecca Horrox, which is set around a lake in Snowdonia.

Cacophonic, is the most recent reincarnation of an ongoing radio show I hosted and played on Resonance FM London since 2005. I went on a break in Feb 2016 and don’t know if and when I will return but I still am very attached to it and see it as an ongoing live project. In the show I play a continuous abstract mash up, a simultaneous genre clash collage. It sounds very pleasantly cacophonous and is still one of my favourite things to listen to.

You are co-founder and artistic director of the charity Liquid Foundations. Can you describe what the charity is about, and your role there? How did you conceive the idea for it?

The charity provides training for staff at Special Schools to facilitate and implement the underwater listening sessions within their curriculum. It involves training in aquatic body work and in understanding the underwater speaker system and musical content so that the schools can use it to enhance the children’s wellbeing.

I was approached by Adele Drake, founder and ex-CEO of Drake Music, in 2009 to set up a programme for children with special needs using underwater sound, and so I am co-founder and artistic director. So far we have been fortunate to receive support, funding and also collaborated with researchers in University of Kent, the Institute of Education and Roehampton University on our sessions in the schools.

Underwater sounds are only audible underwater and the child has to show intent in putting their head on the water in order to hear it. Also, in combination with the aquatic body work, the children lie back extremely relaxed listening to the sounds, it is an artistic experience which doesn’t demand them to respond but just to listen and open them up to develop an aesthetic appreciation of sound. The intimate and womb-like environment inside the water creates a private magical space which some children love staying in.

What is it about the ‘swimming pool’ location that tempts your creativity?

The swimming pool is a great space for listening as the water surface becomes a threshold between two different sound worlds and two entirely different listening experiences. It gives the audience member the opportunity to choose their musical experience as they move in and out of the water, which gives indeterminacy to the music fragmented through the systems above and below the water surface. With their head on the surface the listener can hear both systems and so there is also an opening for splitting a piece in two, playing half on each side of the surface.

I use the different spaces above the audiences head, so there are three levels of speakers from ear level on the floor on pool side to speakers above on the balcony that play more abstract sounds that mix in with the reverberations of the space.

While underwater, due to the properties of sound in water, the perception is immediate, intimate and incredibly clear, sounding like thoughts. So there is a real threshold between private and public spaces and the individual sense in them, which I find a great setting to sonify.

Sound can offer a profound sense of significance to peoples’ experiences of life and their consequently their memories. Do you attempt to invoke any kind of specific experience for your audiences?

I aim to create a scramble of senses with sound, to expose the listeners to an abstract psychedelic experience that can inspire them to listen actively (search for meaning or pattern in the abstraction), or to zone out and have the sound partake in their imagination and their experience of the moment. The music in itself is not intended to be memorable like a tune or lyric that sticks in your mind and evokes a memory, but rather the significance of the experience would be to eliminate the sense of time.

Do you feel that all sound objects evoke connotations?

The question is which connotations: a message, a culture, an action, etc… The brain creates connections automatically so any input would have something in there to connect to even if the connotation changes over time. If there is nothing in the memory banks to satisfy an explanation then the context in which the sound is perceived in is what creates the connotation and often listeners would, in this case, ignore the sound itself and relate to the context.

When I listen to abstract music, because I am familiar with it stylistically (which is a cultural connotation) and enjoy it, I am actually not aware of any other connotations the sounds evoke in me; I just surrender myself to the sounds and listen, but this is also because I often don’t try and explain to myself what I hear.

With the cacophonous abstract mash-ups, I use cultural connotations and associations as compositional material to elevate the essence of the whole set to beyond genre and the cultural tags associated with it and scramble the automation the mind responds with when listening to a particular genre.

What are your opinions relating to alternative states of listening? A mode that might be interesting to discuss in relation to your work is that of Pierre Schaeffer’s ‘reduced listening’…

I understand Reduced Listening as the aesthetic appreciation of sound, removed from any connotation apart from the sonorous qualities of the sound itself. So what interferes with Reduced Listening is the expected cultural and social impact of music, the lyrical aspect and the fact that the sound is tied up with the context of its playback/performance and the intention of the listener.

I think that once the context of the sound has been understood and familiarised, there can be a state of reduced listening and what it becomes is a kind of neutral absorption of the sound without concern for how its made, or what it sounds like but allowing it to affect you almost biologically. In this way Reduced Listening can be attributed to a state of listening of both ravers and deep listeners.

If you are walking in a street market in Morocco and hear Moroccan music playing from the stalls, the context of that music is very understood and the music is expected, so it essentially furnishes your experience like the smells, the sights and other market sounds. This, I think, is also a type of Reduced Listening because the qualities of the sound itself in this particular presentation is its integral part within an aesthetic appreciation of a whole experience.

I’ve identified a state of listening I call Gestalt Listening, which is listening to the whole of a piece without following a particular melodic line, lyric or rhythm. The listener’s attention can be directed to other activities while the sound is happening while still keeping very connected to it. It’s a kind of meta-listening. It’s the way I found myself listening to the abstract mash ups I play. The music becomes a structural accessory to the experience but not its focus.