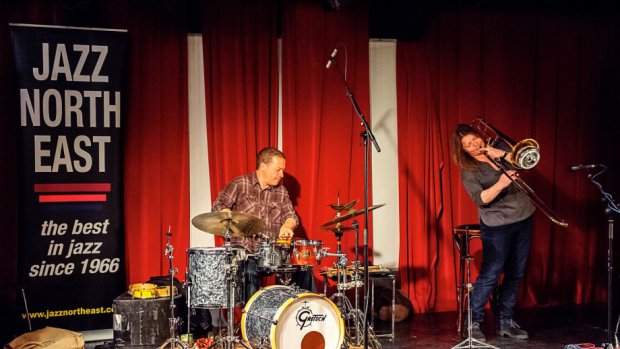 An Interview with Sarah Gail Brand

"I had so much fun and felt so at home in this music... I knew immediately this was a music scene I wanted to be a part of."

Chapters: Beginnings, Life and career, The Work, Inspiration and Other Thoughts 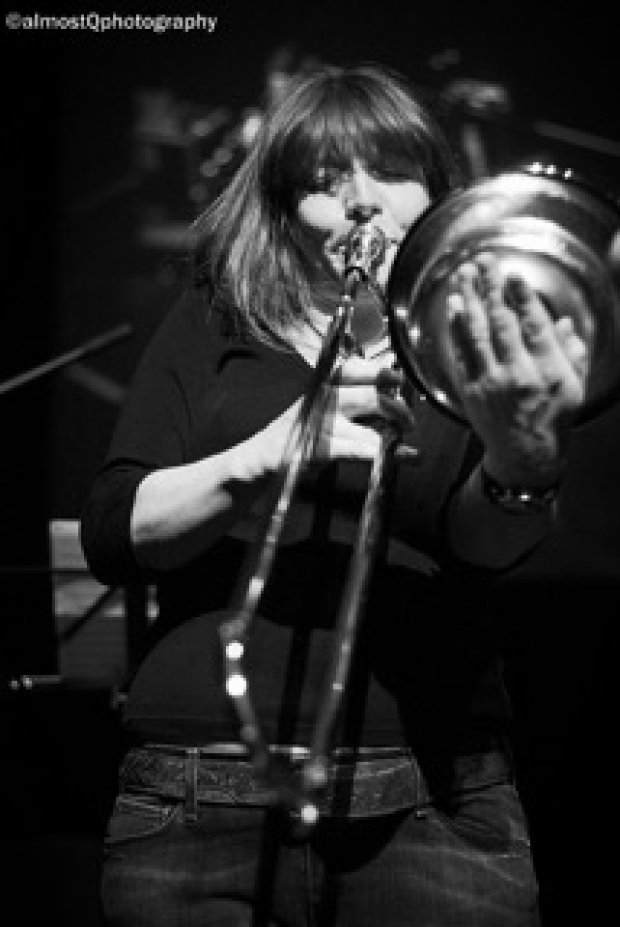 I began playing improvised music in 1994, whilst at Middlesex University. I was there from 1993 – 1996, aged 22 – 25. I had previously been on tour in pop bands and/or running record shops in Birmingham (my home town) before going to college and I wanted to see if being a trombone player was the job for me. I got onto a music degree course at Middlesex, transferred to the Jazz degree course for my 2nd year and met pianist/composer Veryan Weston, who was my composition teacher. He encouraged me to freely improvise with him in our lessons. He then invited me to play with him on a gig at the Red Rose Club, Finsbury Park in London, for the Christmas Mopomoso (which was based there in the 1990s). In the audience were very significant musicians from the London Improvised Music Scene at that time, including Evan Parker, Maggie Nicols, Phil Minton, Phil Durrant, John Russell, Chris Burn, Roger Turner, Lol Coxhill, Paul Rutherford and many more. Alan Tomlinson was also playing and I played an impromptu trombone duo with him to fill in time, as another ensemble was late arriving. I had so much fun and felt so at home in this music – and seemed to be good at it; I knew immediately this was a music scene I wanted to be a part of.

At the same time as this event, I heard Albert Ayler, Evan Parker and John Stevens recordings in a lecture at college. I was also going out a lot to gigs in London. Although I was enjoying listening to jazz, I was enjoying the more unpredictable elements of free playing. I also came across guitarist and composer Billy Jenkins who I am proud to have since worked for, and I really enjoyed his combination of composed jazz with free improvisation. 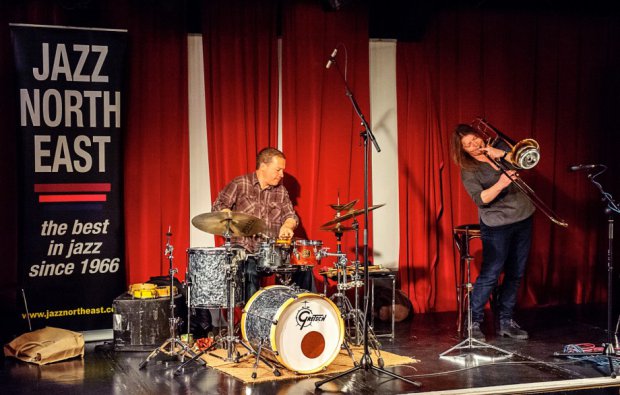 As I continued my college degree, Improvisers asked me– in particular Phil Durrant and Oren Marshall- to play gigs at the London Improv clubs. I remember particularly Richard Sanderson’s gig The Club Room in Islington. I played my 2nd ever improv gig there with Oren and Steve Noble and had such a great time; I really miss that gig. It was a tiny room, but the atmosphere was great and some fantastic sets were played there. From that period of time I formed musical bonds and friendships that have endured. I also got involved with drummer Stu Butterfield’s Changes gig, which happened once a month at the Kings Head in Crouch End. I played there on a number of occasions with Stu, Veryan and other musicians – either playing jazz or Improvised Music, or an experimental hybrid of the two. In particular, I met drummer Mark Sanders there and our association and collaboration has continued to this day. I would say he is the most important musical relationship I have at the moment. However Veryan Weston’s influence, importance in my life and musical direction is crucial and cannot be underestimated. 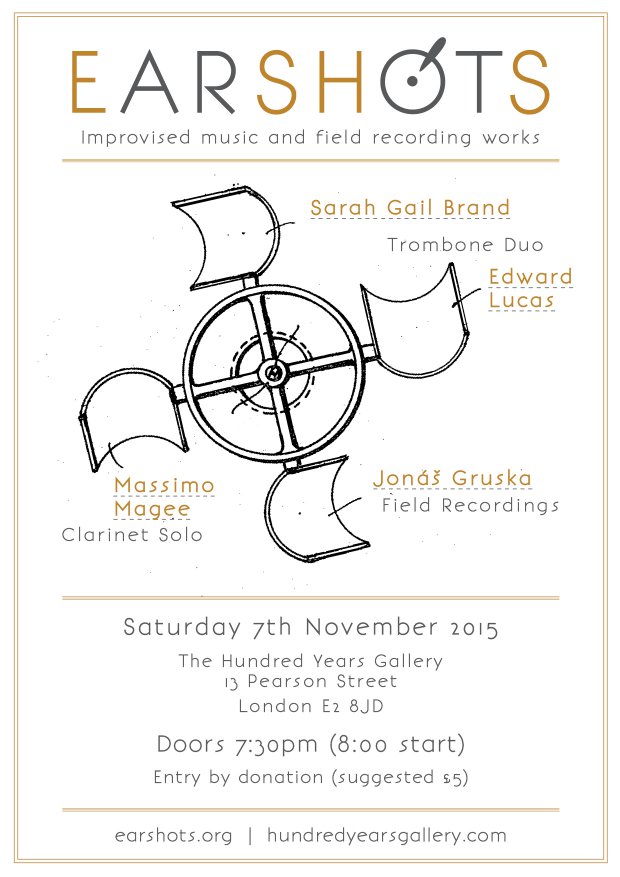 Other collaborators in my life as an Improviser include Liam Noble, John Edwards, Phil Minton, Nick Malcolm, Maggie Nicols, Martin Hathaway, Dave Whitford and Steve Beresford. I have also worked on occasion with Evan Parker and the late Lol Coxhill, who I wish I had played with more, as his singular approach to the music and his resolute individuality I admired hugely. I have also worked with overseas players, including those from the Bay Area Improvisers in California, such as drummer Gino Robair and in mainland with Georg Graewe and Toby Delius. I’m currently working with John Edwards and Steve Beresford in a new trio and continuing my duo with Mark Sanders. I also have a sextet which plays my compositions, with edgy improvisation at the heart of the music.

For over 10 years I have been friends with and worked with writer/comedian Stewart Lee, appearing in a sketch in his series Comedy Vehicle (series 1), and with Mark Sanders in duo (series 2). Stewart has interviewed me on BBC Radio 3, live at the Cheltenham Jazz Festival for his TV show and also on BBC Radio 4.

I was a guest interviewer and presenter for the BBC Radio 3 programme ‘Jazz on 3’, which ran for 18 years until 2016. I made features for the show, including a programme on vocalist Maggie Nicols and had a short series of interviews for the show – Unsung Heroes, where I interviewed long-term musicians of the UK Improvised Music scene, who were not often interviewed or featured in the media.

I also run a little label, regardless, where I self-release - although this is expensive so I issue recordings when I can afford it, basically.

I have been playing the trombone since 1980 when I was 9 years old and at Primary school.

I like to use a combination of extended techniques, creating abstract sounds on the trombone with more conventional techniques. I played in orchestras, big bands, brass bands and pop bands as a young person, so I want to include some melodic and conventional playing in my musical material as well as the more gestural material. It is important that I don’t assault my embouchure too much with extended techniques as it can affect my ability to play the trombone in the long term. But I also enjoy melody and phrase-based playing, as well as rhythmic material, as it provides a counterpoint to other material in a group and provides contrast and colour. Also, having a personal style is important in the development of a musical identity.

I am currently working in pop and rock music, playing and arranging brass section music. I have studied Composition to Masters level so I compose original music and hope to have this played in the future and I also compose for my sextet. At the time of writing this I am waiting to hear if I have been accepted to begin my PhD, which would be entirely centered on my work as an Improviser.

My duo with Mark Sanders is always important to me and we have a new album in production. I am also enjoying my new WToL Trio with John Edwards and Steve Beresford. 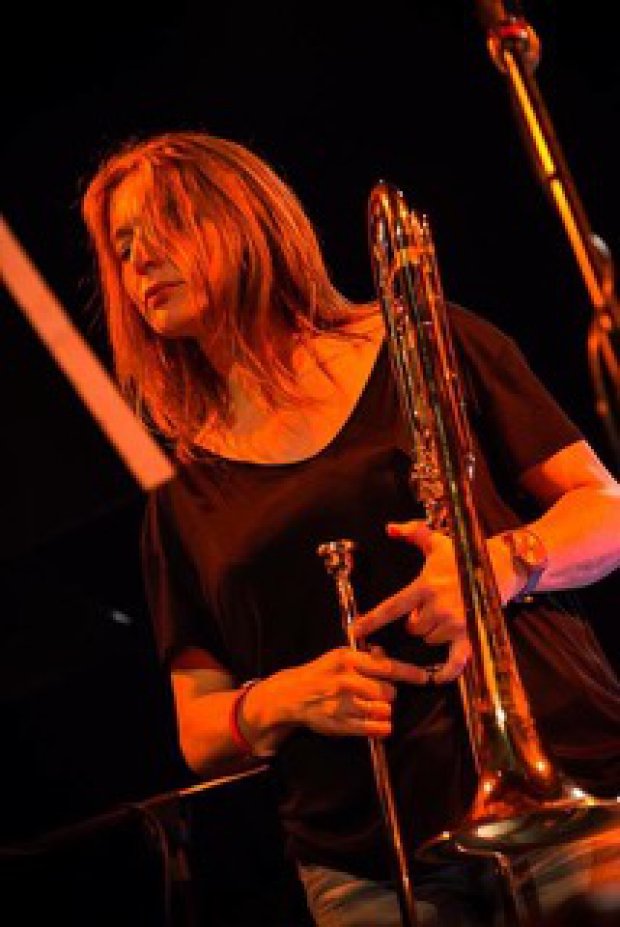 The late Paul Rutherford ( trombone player), Charles Mingus, Maggie Nicols, Mark Rothko, Francis Bacon: amongst many, many others, all have and continue to particularly inspire me.

An Interview with Sarah Gail Brand