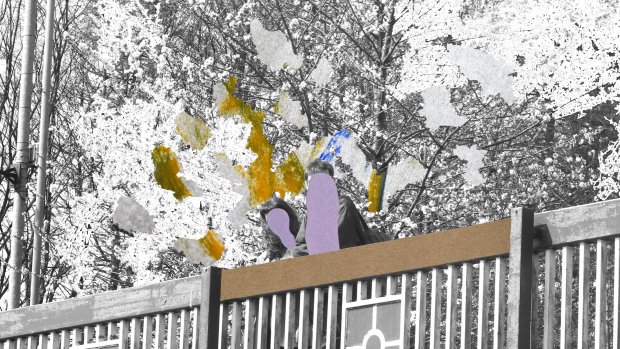 Following their involvement with 'Interpreting Isolation' - The Keeling Curve wrote about their experience of the series and how their work Mersey Beat came to be.

Following their involvement with 'Interpreting Isolation' - The Keeling Curve wrote about their experience of the series and how their work Mersey Beat came to be.

We had been expecting it. The high-wire act of unregulated capitalism and the exploitation of ecosystems was bound to be the catalyst for a seismic change in the way we live our lives. As the Covid-19 lockdown was enforced and the cogs of the music industry suddenly ground to a halt, it seemed more than ever that our role as musicians was to make work that documents our times and attempts to create some meaning out of the uncertainty.

As a violinist and composer, we formed The Keeling Curve in 2019 as a way of bringing together our interests in acoustic performance and electronic music. After experimenting with everything from free improvisation to graphic scores and ambient soundscapes, we released our debut E.P., Turpentine Tree, in April of 2020 just as we were settling into lockdown. Each of the E.P.s four tracks explores a physical landscape associated with climate breakdown. It concludes with ‘Waterloo Bridge’ which features a spoken statement due to be read in court by an arrested environmentalist, and backed by distorted tape loops, fragmented melodies, and an eerie rendition of the nursery rhyme ‘London’s Burning’.

After releasing Turpentine Tree, we were selected to take part in Sound and Music’s ‘Interpreting Isolation’ series, which gave the opportunity for selected musicians and sound artists to create responses to the Covid-19 pandemic and subsequent lockdown. This subject matter felt like a natural extension of our work on climate breakdown, as we believe that humanity's relationship to its environment is paramount to both. Having lost many of our projects for 2020 we were excited to take part in a scheme that allowed us to continue our practice.

Like many others we were stuck in a small flat with no garden, so the government mandated ‘daily exercise’ soon became central to our wellbeing. During these walks, runs, and cycles we noticed changes to the aural landscapes. There were no planes in the sky, and with fewer cars on the roads bird song, conversation, and footsteps became the soundtrack to our new world. Our fascination with these changes gave us an initial plan to use recordings of found sounds taken during the lockdown as the backbone of our response. We put out a public call asking for people to send us short recordings taken during their ‘daily exercise’ and received clips from across the U.K. in response. Judging by the number of rural recordings we received, we felt that the audio clips documented not only the change of soundscape, but also the evident desire to experience nature after the intensities of being stuck inside.

We wanted the music to help articulate this narrative, so it was important that the composed aspects of the piece didn’t subtract from the field recordings. The musical material is generally minimal, consisting of long sustained chords that gradually morph over time. The clear exception to this is the long violin solo in the second half of the piece which, through high register and birdsong-like melodies, evokes Ralph Vaughan Williams’ The Lark Ascending. Through the rising chorus of recorded birdsong Einojuhani Rautavaara’s Cantus Arcticus is also brought to mind. For us these are pieces that capture the awe we felt so often during lockdown of reaching a place of natural beauty, no matter how big or small, after being in isolation.

Organising these ideas required using a simple structure that could encompass both the musical and environmental inspirations for the piece. The work is roughly divided into three sections: the first uses the sound of cars placed in relief to a pulsing synthesizer chord. The cars gradually become more distant and ghostly leading to the second section; a collage of footsteps gradually leaving the urban environment. Finally, the violin solo which, as it reaches its highest point, begins to sing with the birds before eventually being submerged by the sounds of cleansing waters. This structure traces a journey of man-made sounds to those of nature, mirroring the narrative we saw so often at the beginning of lockdown that, in the absence of humans, nature reclaims space.

Mersey Beat takes its title from a genre of Rock ‘n’ Roll popular in Liverpool in the 1960’s. In fact, it is where the ‘Beat’ in The Beatles comes from. This title felt fitting because a number of the found sounds used on the track are taken from our own walks along the River Mersey in Manchester. Bill Harry who founded the magazine Mersey Beat claimed that he was thinking of a policeman’s beat. This also felt relevant as lockdown has led to a re-evaluation in society’s relationship to the police. There needed to be public trust that the ‘draconian’ new measures were for the benefit of society and as laws, rules, and ‘advice’ became intertwined more than ever the government, and by extension the police, were ruling by consent. Another commonly cited source of the term ‘Mersey Beat’ is that it is a reference to the beat of the music. To us this is reminiscent of the pulsing or beating of the synthesizers in the opening section of our work but also to the movements of the river itself. Judging by the numerous recordings of rivers and water we were sent, these had become the beating heart of our country; a place where people would go to cleanse themselves of the indoor spaces they had been locked into for so long.

And so, we return to the environment. The analogies between stopping global pandemics and averting climate breakdown are clear and have been well stated elsewhere. Our combined failure to understand the impact of our actions on ecosystems, while blindly continuing to overwhelm our natural support systems has come at a cost. Pandemics are becoming more frequent and thousands of people around the world are already suffering the effects of climate breakdown. The extended ‘pause’ of the lockdown has afforded us a time to reflect on what we, as a society, value most. In the words of Ralph Keeling we must ‘listen to the voice of the earth’.

You can read more about 'Interpreting Isolation' here. Listen to Mersey Beat in full below: