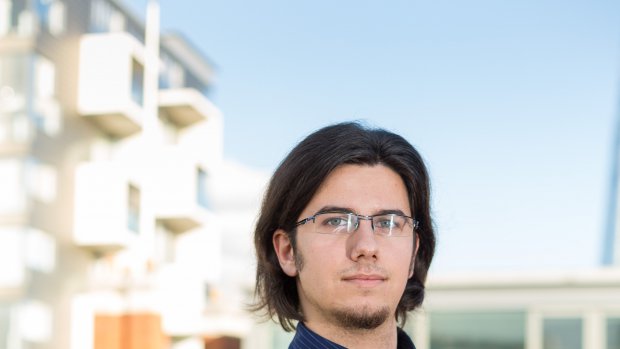 When I started working with Sound and Music on my internship, I didn’t have the slightest idea that it would lead me to almost all corridors of a building such as Somerset House, including basement level called Deadhouse. It sounded really terrifying, but also like a really interesting place to listen some performance. In other words, I was caught in the main idea of Jacob Thompson Bell, who wanted to use this 200 year old (but lively) building and present sounds of Somerset house. It is a part of the Sound and Music’s Embedded Artist in Residence with Somerset House, huge project for single composer to explore sounds, people and places on this historical site. Unfortunately, I haven’t got the opportunity to see all events that he held, but reading his online composer’s diary and participation in final event was really great, a mind opening experience.

Using only microphone and sketchpad, Jake explored the unnoticed, everyday sounds of people’s voices and footsteps echoing through massive halls and staircases. Recordings from basement of the New Wing are particularly great (and haunting), which include sound underneath Waterloo bridge (flow of the river combined with traffic), peeled paint underfoot and generator buzzing. It is the isolation of the place that may have such and impact on these recordings, restricted area below the traffic of the Victoria Embankment with the sound of long forgotten, abandoned places. Contrary to these recordings are interviews held with staff of Somerset House, mixed altogether in lively recording presenting various people, their voices and different environments they are in. Other recordings, “audio Diaries” include E. J. Safra Fountain Court, Seamen’s Hall, Nelson stair’s and much more interesting places around Somerset House that are sometimes crowded with people making a lot of noise. Besides recording, Jake created sound maps. It is imaginative way of writing a score that can capture every sound from our hearing perception. Jake collaborated with Vania, tour guide of Somerset House, to make a great sound map with interesting thoughts on how sound and silence, as invisible substances, are squashing and pushing each other in the “competition of sound space”. Another significant thing about sound maps is that they can be performed, which is next part of Jake’s exploration.

Performances where based on the idea of improvisation and recomposition, with different groups of people responsible for each type. Spread around the building, first such event was held in the Seamen’s Hall. Performed by four musicians on baroque instruments, it was a composition of electronic drones combined with recomposed cello suite of J.S.Bach. Significant role was given to place itself, turning Seamen’s hall into fifth performer with his wide sonority. With that in mind, Jake prepared his last event of residency called Listen/Here, which was basically a tour through Somerset house, with a few significant checkpoints. Starting from Embankment entrance, visitors where first encountered by Ligety quartet in Great Arch hall. Ligety quartet was really astonishing by capability to prepare “the memory” of the place, with subtle, but expressive performance of recomposed old sea shanty (which was probably sung in that same hall, nearly 200 years ago). Mostly diatonic, and in the long chords that need to be “bowed”, Jake again used the sonority and echo of the great hall to emphasize the experience, and to smoothly shift listeners to some other, distant sound, colliding with ear pleasant shanty. On the other end of hallway was the next stop, improvising trio performing Jake’s sound maps in the Stamp staircase. Colliding sounds and shifting from one performance to another by passing through corridors was great experience which felt like travel through time, jumping from old sea shanty to modern sound of improvisers performing on trumpet, cello and vibraphone using all their imagination and wide range of playing techniques to present Jake’s idea. This time sound was heading up, through five floor staircase and spreading to almost all other corridors of the Somerset house, sending the music based on the sounds recorded and scored in this same building during an earlier session. Last stop was in already mentioned Deadhouse. I was expecting some unnatural trip through music full of references to death and macabre (which are really often used by artists) in the heart of unknown parts of Somerset house, but Jake is fully aware that we live in the 21st century. In the Deadhouse he placed CoMA (contemporary music for all), ensemble divided into three groups of improvisers, performing music of low, mid, and high frequency of a subterranean generator. With the speakers all around the place playing the recordings of the actual generator, it was the experience of modern day basement in the old building, with stuffy air, dim light and noise from steam pipes, generators, all scored on sound map and imaginative performed by CoMA.

In the end, Jake’s residency was highly successful exploration of all sound aspects Somerset House can give, time travel through history of building and brief reminder of how interesting can be the usual, unnoticed sounds that surround us.