"I enjoy writing music that is about more than just one thing, and I’ve come to view a composition as the end result of a learning process"

Ben Gaunt explains the way he thinks about form when composing
Spotlights: How I Compose

“...it has often been claimed, especially since Kant, that music is an art of time, if not the art of time.” (Philip Alperson)

“Too many pieces of music finish too long after the end”

I was mortified; I figured my music, flabby in form and lacking in direction, had posthumously irritated one of my heroes. My PhD, amongst other things, was an attempt to correct this flaw in my compositional technique. I devised a way of thinking about form, and coined the term ‘singular structure’, of which there are two types:

A large portion of my doctorate was devoted to exploring singular structures and time proportion as compositional tools (to mixed success). As a consequence of this, I developed a number of curious habits – for example, I tend to know exactly how long each piece is going to be (often to the nearest second, or fraction of a second) before I begin working on the notes themselves. I use mathematical principles and patterns to work out the durations of sections (even the durations of bars) and will often use Sibelius (the notation programme) to create manuscript paper, bespoke for each piece, with double bar lines and time signatures already printed. I typeset my work on an almost daily basis, print it out, and then handwrite on the printout. 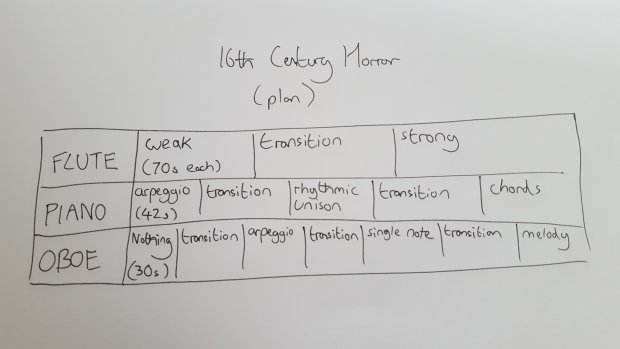 The movement begins in a gentle, fragile manner and gradually becomes more strident and forceful as it progresses. It is, therefore, a transitional singular structure in its own right; however, each of the instrumental parts are also constructed using singular structures (both transitional and static). The flute part is comprised of three 70-second sections; the first a static ‘weak’ section, the third a static ‘strong’ section, and, in between, a transitional section that begins weakly and ends strongly. The other instrumental parts function in a similar way (five 42-second sections for piano, seven 30-second sections for oboe).

I suppose the point of all of this is that I retain control over the duration, pacing, events, climaxes etc. but, by superimposing, I blur the lines a bit and make the nuts and bolts harder to hear.

16th Century Horror is about the films of David Cronenberg, the art of Salvador Dali and Rafael, mutations, exploding heads, and a book of hymns from the year 1520. I enjoy writing music that is about more than just one thing, and I’ve come to view a composition as the end result of a learning process; I delve into something, read about it, talk to people about it, think about it, and then write about it.

An old composition teacher of mine once gave me a piece of advice (and I am paraphrasing): “Sometimes it’s nice to spend all day thinking about a piece, and to let it consume you. Other times it’s good to write something quickly, and not to worry too much about it.” When I was his student, I was an advocate of the latter sentiment. Now, I’ve converted to the former. I spend months writing even the shortest solo work: selecting and combining extra-musical stimuli, testing mathematical patterns, producing countless sketches and endlessly doubting everything I write and rewrite. The process is fraught and frantic, and often unpleasant – I ended up experiencing (somewhat terrifying) chest pains when planning my ensemble piece, Carina’s Observatory, and went to hospital as a result. Thomas Adès describes something similar during the composition of Asyla: “I was hyperventilating and thought I was having a heart attack”.

When I was selected to write a piece for members of the London Symphony Orchestra (as part of the wonderful LSO Soundhub scheme), I decided to take things further and write about a topic I knew well: karate. Rather than merely read, talk, and think about it, I was able to inhabit and internalise it; I am a black belt in karate, and possess an understanding of what performing this martial art feels like (something I wanted to translate into music).

I wrote an extended programme note, which might help explain how the music and movement are related: http://lso.co.uk/more/blog/570-empty-hand-peaceful-mind.html

I am very pleased with the end product, but the music did not come easily. I remember on one night, probably around 3am, I was writing the first movement and struggling to understand what the sound of somebody kicking their palm feels like it should sound like (or sounds like it should feel like?). So I walked to my nearest park and spent about an hour performing the movement. My palm hurt. My brain hurt. But I figured it out (ascending viola glissandi and crescendo, combined with a clarinet slap tongue). When watching the video, I noticed the camera at that particular point (0:44) was focused on the players and not the karateka. Oh well.

As part of the LSO Soundhub scheme, I was mentored by Harrison Birtwistle (who cooked me the best lamb I’ve ever eaten... sorry mum!) and he gave me a piece of compositional advice that I am still mulling over: 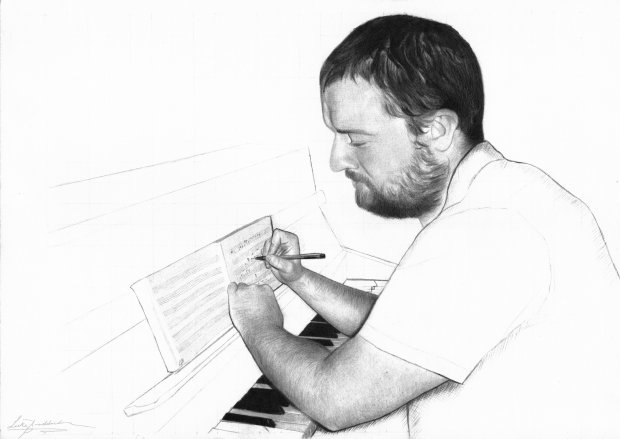 and The University of Sheffield where he recently completed a PhD. He has been

George Nicholson and others. Ben's music has been performed by the London

of the Engine House (which he co-founded) and Size Zero Opera. Ben's music has

been published by University of York Music Press, premiered at HCMF, and

released by NMC. He is a senior lecturer at Leeds College of Music, and a tutor

at the Open College of the Arts.