"I found it curious that I, an atheist living in the 21st century, was writing music for medieval instruments to be performed in a church."

Alex Nikiporenko details the process he used to write a piece for recorder quarter BLOCK 4
Spotlights: How I Compose

In July 2015, the composer Nicholas Peters and I were organising a concert as part of our ongoing series 840. It featured the recorder quartet BLOCK4  - and I was to write a piece for them. The ensemble had numerous instruments in their disposal – the usual sets of medieval and renaissance recorders as well as a set of Paetzolds – large, modern, box-like instruments that look like something from an Ikea flat-pack. The musicians wanted the composers to mix and match the instruments from the different sets, and I was happy to oblige; I picked two renaissance tenor recorders and two Paetzold basses. The piece was going to be premiered in St James' Islington – an Anglican church. I found it curious that I, an atheist living in the 21st century, was writing music for medieval instruments to be performed in a church. The resulting composition was an attempt to reflect on these circumstances.

I have an active, if somewhat amateurish, interest in Early Music – I enjoy listening to recordings and playing through scores. To me, the recorder has always been associated with this period and I found its voice-like tone particularly suited to polyphony. This meant that further research and observation of music of the epoch was my first step in planning this piece. Many examples of medieval polyphony are built around the Tenor – a voice in longer note values that often carries a Cantus Firmus, a pre-existing melody. I came up with a process that is built around this feature:

I decided to find inspiration in the unique circumstances of this project when searching out the required materials.

One of my last interactions with a Christian church service came around through the mother of a piano student of mine. She was a regular worshipper at a small Pentecostal church based in a former industrial space in Dagenham. I was employed as a sole musician accompanying their praise and worship songs, a genre that I have not previously been exposed to. Brought up on the solemn, archaic hymns of the Russian Orthodox Church, I was struck by how modern and direct these songs were. One song, We Want To See Jesus Lifted High by Doug Horley, got stuck in my head – perhaps because of its particularly catchy chorus that alternates the words “We want to see” with clapping. I felt this song would make a suitable Tenor for my composition.

My next step was to find a piece of medieval polyphony with a Tenor that featured all the melodic intervals present in We Want To See Jesus Lifted High – a surprisingly difficult task given the presence of rising fourths and fifths in the melody. However, I eventually found what I was looking for – Dappoi che'l sole, a caccia by Niccolo da Perugia, a 14th-century Italian composer. I liked the fact that this was a secular work – breaking it up into building blocks that would be reassembled into a sacred song was a symbolic gesture, for me reminiscent of medieval popes breaking down Roman architecture to build churches.

With all the material at hand, I began constructing the piece by following these steps:

You can see how I used this process to build the first few bars in the following example: 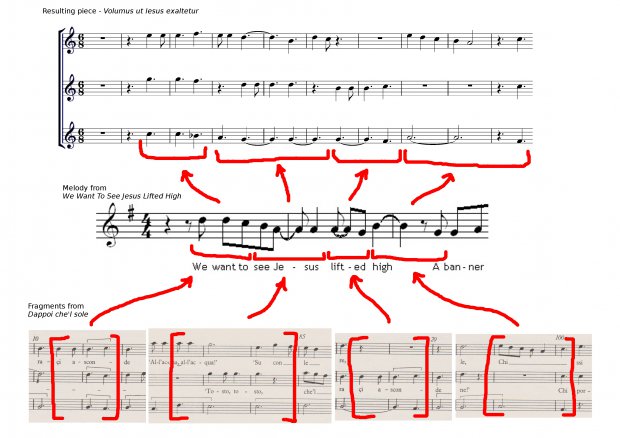 Having applied this process to the entire length of the song, I have now had a three-part piece with the top two voices (renaissance tenor recorders) playing the cut-up fragments from Dappoi che'l sole, and the bottom voice (Paetzold bass) playing the Cantus Firmus – We Want To See Jesus Lifted High. I still had the second Paetzold bass to write for. My solution was to give it a role crucial in pop music (and praise and worship songs) – a bass part that carries both the harmony and the beat. I have transcribed the bass part from the recording of We Want To See Jesus Lifted High I found on YouTube –  and used it in my piece. 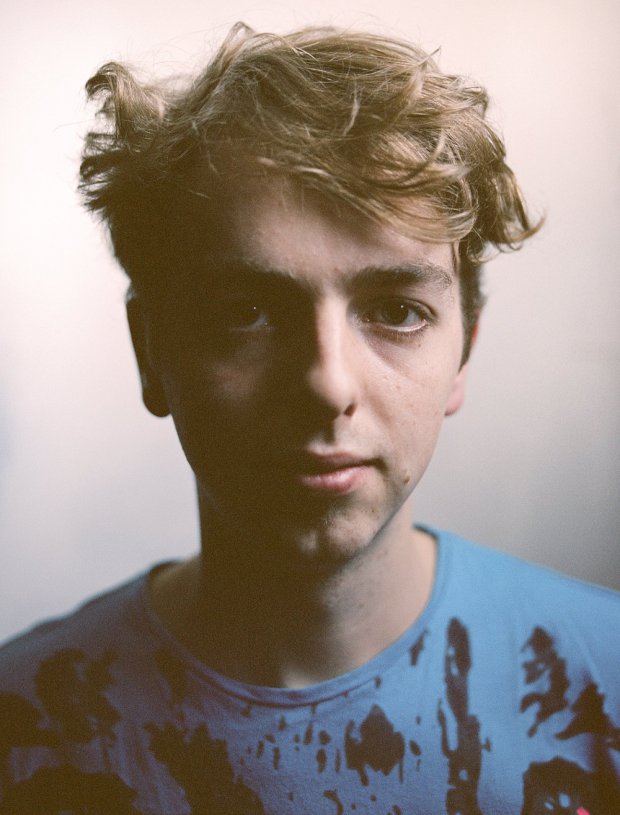 Alex Nikiporenko is a London-based composer studying privately with Laurence Crane. Previously, he read music at King's College London and completed a Masters in Composition at the Royal College of Music, where his studies were supported by a Leverhulme Postgraduate Studentship and the Derek Hill Foundation. Alex was a winner of BBC/Guardian Young Composers' competition and a Creative in Residence at The Hospital Club. His music has been performed by ensembles including Tre Voci, Fidelio Trio, Lontano and Aurora Orchestra, the commission for the latter having been broadcast on BBC Radio 3.