'How I Compose' Series - I - Lee Westwood

"It is my hope to contribute, in a small way, towards painting a bigger picture of how people compose"

Lee Westwood spills the beans on the process he used to compose '...and the stars were like pinpricks in the black fabric of night...'
Spotlights: How I Compose

When a work of art appears in your headphones it is, in a sense, immaculate: where it came from, how it evolved; these issues often leave no trace. Personally, I'm just not satisfied with such unanswered mysteries, and time and again am left craving the knowledge of how one might go about creating such a delicious specimen of sonic culture. Throughout this series I'll be inviting different composers to talk about how they work: their daily practices, their rituals, habits and impulses...

Whilst inviting others to disclose what is often a solitary practice, it seems only right to first reveal something about my own work. Through writing this article, however, I make no assertion about the quality of the music. Rather, it is my hope to contribute, in a small way, towards painting a bigger picture of how people compose: it is the journey, rather than the destination, that is under scrutiny. And the routes one might take in such a journey, without a doubt, are many.

This current article divulges the compositional process I used when writing '...and the stars were like pinpricks in the black fabric of night...'. For the sake of convenience, I've divided this method into 10 clear-cut stages, although in reality it is never quite so linear.

Personally, I'm not someone who needs a reason to sit down and write, any more than the fact that I have an idea for a piece... but many people are, so a motive seems a fitting place to begin. In this case, the initiative was an invitation to write for Ed Hughes' New Music Players (flute, clarinet, piano, violin & cello), for their performance at The Warehouse in September 2015.

This is the part where I have to justify to my girlfriend that, whilst it appears I'm simply lying on the sofa staring into middle-distance, I am actually very busy (ahem). Before I begin writing, or even playing around at an instrument, I spend time considering what I might want to write about. Often this involves drawing pictures that depict the hypothetical shape of the piece, and developing a conceptual framework in which everything will take place (see below). This stage also means considering what the instrumentation suggests to me, listening to my 'inner ear' and trying to hear what the music might sound like.

Step 3: Sitting down at an instrument...

For this piece, once I had some basic ideas, I sat down at the piano and played around. Through this tactile experience I began to develop a very fluid, rhythmically elastic motif using overlapping sequences of repeated notes that fade in and out at different tempi. This idea became the backbone of the work.

Using as a starting point this simple texture, I let my imagination take free reign, and quickly became preoccupied with the sense of a revolving body of sound that surrounded the listener. It brought to mind the idea of the rotating heavens and the varying brightnesses and magnitudes of the celestial bodies as they move closer and further away, or in and out of view. I recalled the Medieval notion of the stars, which were believed to be holes in the firmament, through which could be seen an all-encompassing fire. This firmament formed the last of the seven celestial orbs, a static outer layer - the remaining six rotating at different rates and distances around the Earth, carrying with them what appeared as the Sun, Moon and planets. In my mind, the voices in this work began to portray those holes through which light is let through, flickering at different speeds and distances as they revolve. The character of the music would be peaceful, nocturnal, and would be centred around a piano-led cycle of pitches - the strings and woodwind acting as a selective resonating chamber for those larger heavenly bodies, which shine brighter than the rest.

Sympathetic to this idea of cycles, the pitch content (essentially a monody) would be a simple, repeating tone row. In order to create a sense of movement, and to prevent the work from quickly growing tired, I imposed a number of processes on the material:

1.The pitches would transpose to different registers on each repetition, creating a continual flux;

2.Just as six of the seven celestial orbs are mobile, so eight of the pitches would be fixed, whilst four (a small chromatic cluster) would be set 'in orbit', each one moving a different number of spaces forwards in every cycle;

3.I later used filtering techniques to avoid repeatedly using all twelve pitches, eventually concentrating them right down to a major triad, then just a single note, and finally back towards the 'orbiting' chromatic pitches only. This was partly done by cutting holes in a piece of paper, laying it over my sheet of pitches, and only using those that remained visible;

4.One overarching process gradually unfolded throughout the entire work: whilst the music begins as a piano piece, gently coloured by strings and woodwind, these outer voices gain increasing importance. By the end things have been covertly turned on their head, with the strings and woodwind sharing the melodic line, and the piano reserved for gently highlighting odd pitches. 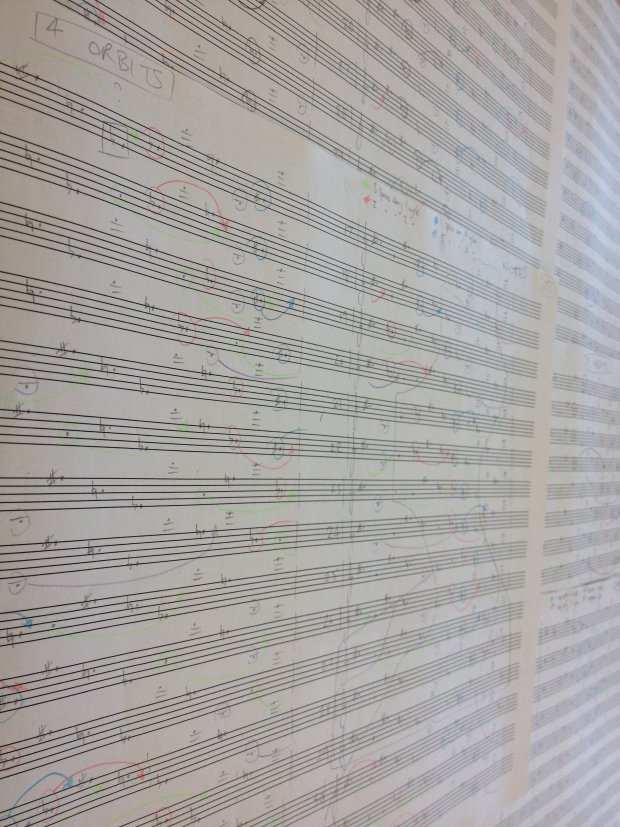 Needing a fluid way of approaching rhythm, outside the clunky tradition of note values, I decided to use spatial notation to create a grid onto which any combination of tempi could be overlaid with ease. This is where score study comes in: works by Grisey (Periodes), Murail (Ethers) and Penderecki (String Quartet No.1) helped a great deal in providing notational solutions.

It certainly pays to be open about your ideas. Often, I learn most by talking to people about what I'm writing, not just through the advice I might receive, but simply by having said the idea out loud. Whilst writing the current piece, I learned a great deal from composer Martin Butler, who offered advice on playability and notation; clarinettist Heather Roche, who kindly provided technical information on timbral trills (although these weren't used in the final piece); and my long-suffering girlfriend Tímea, who patiently listened to me rattle on about my ideas throughout the whole process.

With a better idea of how the piece would fit together, I set about trying to sketch out a first draft, warts and all. This phase involved a number of sub-steps:

2.Selecting pitches to send 'into orbit' around the row, and selecting their pattern of orbits (this involved quite a bit of trial and error, and lots of coloured pencils), and writing out about 40 cycles of this pattern;

3.Organising the registral contour of this entire cycle;

4.Preparing a spatial grid into which I would score my first draft;

5.Spending literally forever working out the best method of pacing the entry and speed of each voice;

6.Assigning instruments to every note that needed highlighting throughout the piece;

8.Finally writing out a draft!

Composing in layers is incredibly useful: I find considering everything at once is often an impossibility, and creates a writing process so slow and cautious that it breaks the flow from imagination to paper. 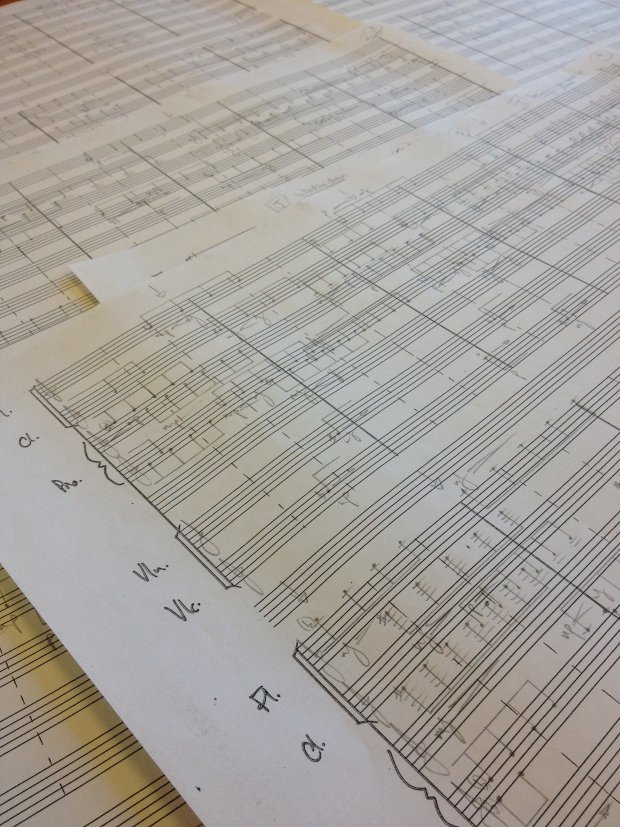 The image of Mozart casually jotting down a new piece whilst watching his friends play billiards seemed very far away... My apparently free-flowing music had so far involved a lot of preparation, of to-ing and fro-ing, laboriously writing, measuring, typing, and then scrapping and starting again... Issues of pacing became an excruciatingly delicate and complicated affair. Draft after draft involved re-scoring the piece with essentially the same contours, each time adjusting the density of material, the acceleration and deceleration of the voices, dynamics, etc. And in doing so, each attempt edged a little closer to what I sought.

With a handwritten copy now as close as I could get without hearing the piece played, I typed my score into Sibelius, where I could create a very tidy, readable and malleable final score. In addition, although the playback function of Sibelius is often misleading, it can also be highly useful in terms of pacing of ideas, checking for mistakes, etc. Because of the method of notation I'd adopted, it meant spending a day working out how to force Sibelius to write spatially, and then several more days typing it in and tweaking all the timings, until I was entirely satisfied.

Could it actually be that the end is in sight?! If you take pride in the presentation of your scores (which I certainly do), it means that there is usually a fair bit of work to do in order to make sure things are aligned and laid out as they should be. Add to that a coversheet, preparing parts, writing performance and programme notes, compiling a PDF, etc, and you find the list of hidden tasks that await you at the end can be fairly substantial. But when all is done and dusted, ultimately the extra effort proves worthwhile. And that, as they say, is that – with the parts off to the musicians, it's finally time to bask in the gratifying warmth of a newly-finished score for a short while!

You can hear the premiere of '...and the stars were like pinpricks in the black fabric of night...', along with the full score, here:

Writing music, as with any creative act, is a personal thing, and with any dedicated artist, I think it's fair to say that the methodology is something that develops over time, just as with the artistic output itself. Whilst I would certainly not like to suggest that the steps I've outlined offer any sort of 'composing-by-numbers' approach, or that this poses, in any way, as a superior method than any other, I hope that, alongside the other compositional practices divulged in this series, a little light is shed on the vast spectrum of ways in which those musical creations that enrich our lives are made. 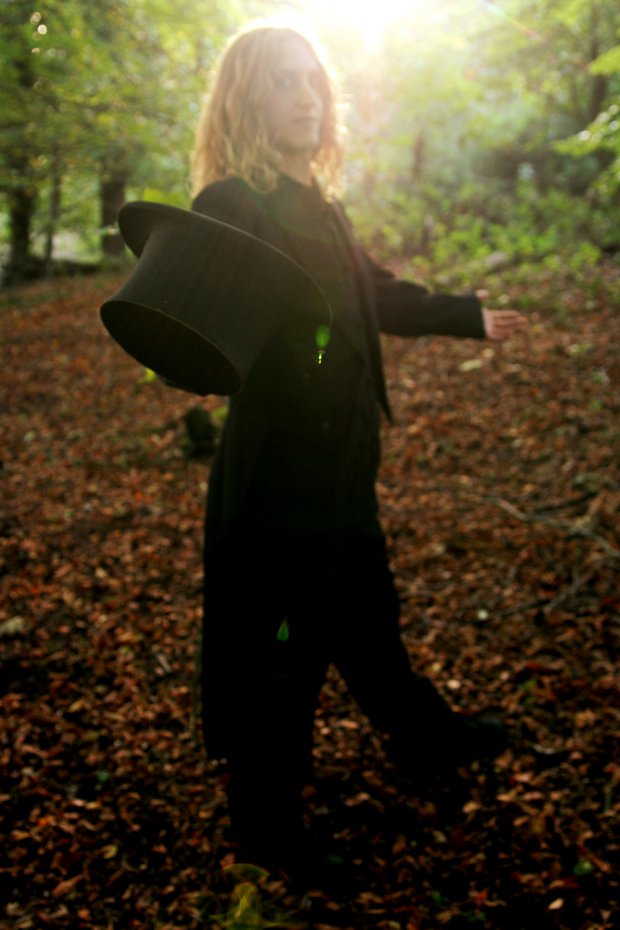 Described by the Musician's Union as "one of the UK's most exciting and versatile musicians", Lee Westwood is a  guitarist and composer whose wide-ranging output stems from a long-term tenacity  for musical exploration. Lee's  works range from the Geometry-Music crossover of his multimedia exhibition 'A Hidden Order' (Saatchi Gallery, Athr, SCOPE) to a vast back-catalogue of intimate works  for solo guitar; from headlining festival stages with Hip-Hop groups and Prog Folk acts (Dizraeli & The Small Gods; Le Juki) to commissions from some of the UK's leading ensembles and choirs (LSO  Soundhub; Joby Burgess; Workers Union Ensemble; Musarc; Riot Ensemble; Notes Inégales).

'How I Compose' Series - I - Lee Westwood