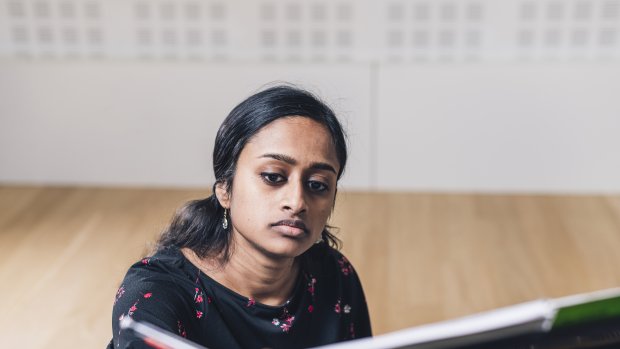 In the fifth installment of composer Alex Ho's curated series on transnational identiy in new music, we hear from composer Shruthi Rajasekar.

I recently had the pleasure of writing for the National Youth Choir of Great Britain in their wonderful Young Composers Scheme with NMC Recordings. For their theme of Discovery, I turned to numbers, those humble digits that allow us to organise the world around us. As I encountered different numerical systems, an “energetic, quirky, and earnest” piece began to emerge—these descriptors became performance markings in the score. Numbers is an ode to the choral practice of deconstructing a piece into its components, a glimpse of the rehearsal process that audiences rarely see. In various musical settings, numbers help performers measure melodic and rhythmic distances and position themselves within a larger context. For me, numbers were the key to unlocking Western classical music.

I have always been musically connected to my Indian Tamilian heritage. My mother, internationally-renowned veena player Nirmala Rajasekar, is my guru in the rich Carnatic (South Indian classical) tradition. I am incredibly fortunate to be a part of this thriving cultural practice, particularly because I grew up in the USA’s suburban Midwest. I am from Minnesota, where the dynamic arts community is open to learning and collaborating.

When I joined the school choir in the sixth grade (beginning of secondary school), I was unfamiliar with Western classical singing. I had wonderful teachers—throughout my education—who spent extra time helping me navigate my two techniques of vocal production. But an obstacle was sight-reading, which isn’t present in the oral Carnatic tradition. Uniquely existing in my particular musical situation, I had to build a bridge between the systems.

Carnatic musicians decode phrases with swaras. Swaras, consisting of the seven syllables of Sa, Ri, Ga, Ma, Pa, Da, Ni, are both our musical alphabet and our solfège. I soon realised that the dots on the page related to each other; if I assigned a (temporary) tonic, then subsequent pitches could be interpreted as numerical scale degrees relating to that tonic, just as Ri through Ni are all based on how we designate Sa. With this bridge, I entered a world that might have otherwise been inaccessible. A hybrid understanding of music informed the music I was learning and writing.

Numbers has additional Carnatic connections: the first section’s notes (0:00-1:30) are in the raga Chalanattai (Melakarta #36), the five-quaver rhythms in the middle are split as 2 + 3 in the style of kanda chapu, and in the aleatoric portion (3:16-4:05), singers receive a blank box in which they are invited to write their own unique patterns; this reflects our belief that every performer is also a composer. But Numbers does not require training in techniques of another idiom. In order to create and contextualize a deeper cultural connection between singers and their material, the time and space for this should be structured into the piece and learning process. This is what I was able to do with Gaanam.

I am often requested to write music with an “Indian” connection; when I agree to do so, I take those situations as opportunities to further my learning and educate audiences. Creating Gaanam (“singing” in Sanskrit) was my personal reflection on how the two idioms in my life can co-exist in a composition. There are many approaches to such a question—I am learning that my practice is intensely personal and communal as I interact with the distant and present diasporic body—but in the case of Gaanam, I studied the deep-seated principles of our contemporary Carnatic compositional forms; while usually presented as monophonic or heterophonic, they nonetheless have the extant potential of being multifacetedly realised by a vocal ensemble trained in Western classical contemporary concert music.

Take viruttham, for example. The improvised form is a musical meditation on a short text; the performer might repeat and emphasise certain words as their improvisation expands. To me, an aleatoric ensemble of voices polyphonically rendering the single line (2:46-4:44) amplifies the guiding principles in viruttham.

Gaanam is a living celebration of the Carnatic idiom; that includes subtle and humble subversions of tradition, like the unusual decision to make the mora, the penultimate element of the rhythmic section’s thani avarthanam, a climax (7:21-7:54). To do a piece like Gaanam, extreme sensitivity and respect are required, and this was the environment created by conductor Gabriel Crouch when the Princeton University Glee Club gave their extraordinary performance.

While living in the United Kingdom these past two years, I have had the opportunity to unpack the post-colonial legacy underlying my Indian-American identity. Unravelling it alongside British musicians has been a journey of reflection, healing, joy, and love. This is the promise that music of today holds: creating is not only the process of examining, decolonising, and deconstructing, but also of building and growing together.

1/ Out of Context Series – I CARE IF YOU LISTEN

Shruthi Rajasekar (b. 1996) is an Indian-American composer and vocalist exploring identity, community, and joy. Chosen by The Guardian as a "composer to listen to", Shruthi creates music that draws from her unique background in the Carnatic (South Indian classical) and Western classical idioms. Upcoming works include projects with the Royal Scottish National Orchestra, the National Youth Choirs of Great Britain, Psappha, and London Youth Choirs. Performed across North America, Europe, and Asia, her music has also appeared on BBC Radio 3, Classical WSUF, WWFM, and MPR. In January 2020, NMC Recordings released two of her pieces by the National Youth Choirs of Great Britain. Shruthi is a classically-trained soprano and Carnatic vocalist, and particularly enjoys collaborative projects. A Marshall Scholar, Shruthi has spent the past two years in the UK at RNCM (M. Mus, Composition with Adam Gorb and Laura Bowler) and SOAS (M. Mus, Ethnomusicology with Richard Widdess and Richard Williams).

It is difficult to say whether she will miss her dear British friends or Sticky Toffee Pudding more, but she looks forward to visiting (consuming) these loved ones in the near future.