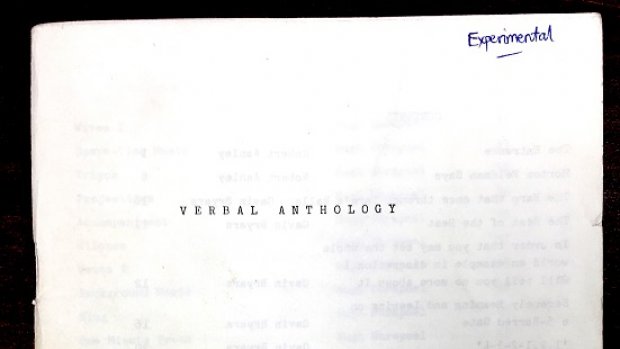 Everything begins as mystique and ends in politics - pt.1

In the first of a four-part curatorial series, Amble Skuse asks: what does performance art tell us about the world we inhabit?

I’m interested in power and how it manifests. So the choice to curate the Experimental box from the British Music Collection may seem a little counterintuitive. After all, power stems from big concertos, commissions from kings, and requiems for great people, doesn’t it? Well, that is one way of looking at power, but if we want to critique it perhaps we need to look at composers who are not taking this top down approach to composing. Not asserting control over the players with every minutiae of notation.

In the experimental box we find composers whose work explores the usual musical considerations, tone, melody, harmony, rhythm, texture, colour etc, but also are aware of the structures around how we make music. These experimental composers are exploring ways in which we can subvert traditional hierarchical music composition using techniques from cultural theory. In this box we find approaches from Marxism, Anarchy, Feminism, Disability Theory, and Globalisation applied to the music making environment.

I’m interested in the ways in which music can incorporate broader socio-political themes, through its performance direction. Personally, I work somewhere between composer and performance artist, using music and sound in a performance art context, imbuing the ‘performance’ of the work with further readings related to socio-political context. I find that this approach allows me to use context to add meaning to my performances.

Wikipedia has a great intro to performance art.

“It can be any situation that involves four basic elements: time, space, the performer's body, or presence in a medium, and a relationship between performer and audience. Performance art can happen anywhere, in any type of venue or setting and for any length of time. The actions of an individual or a group at a particular place and in a particular time constitute the work.”

So we can see that it broadens the context for performance to any type of venue or setting and for any length of time. It also focuses on the actions of the performer as a part of the work, and allows us to read the entire context of the work as the work itself. A concert in a hall is very different from a concert in an apartment or a library. Each of those venues has its own “reading” and therefore contribute to the meaning of the work.

Firstly, let’s have a little think about how performance of music can affect its meaning.

The Verbal Anthology provides a good starting place for considering how the structure and performance of music can change its meaning. 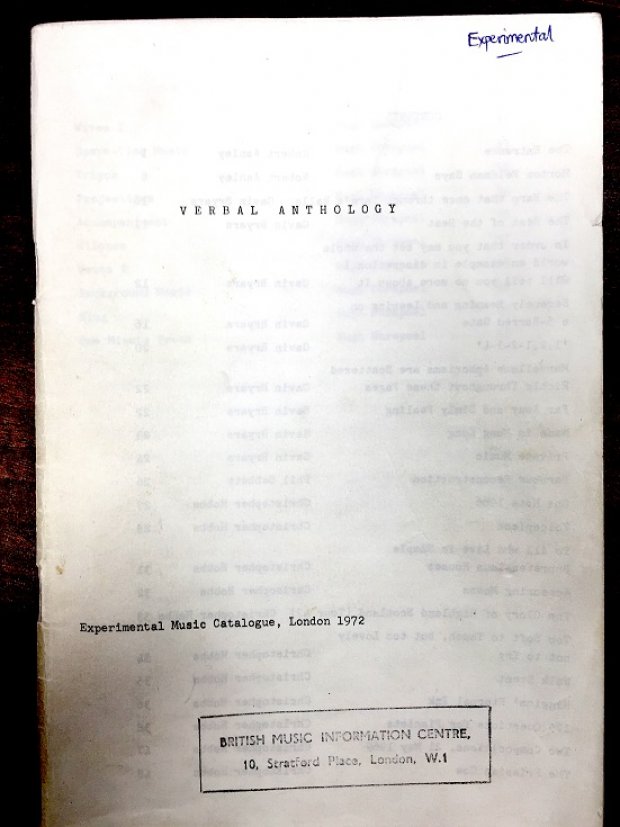 Robert Ashley explores this in his piece “The Entrance”. We need to consider the relationship of the work, to the space, to the audience, the attitude of the performer, and whether an audience should be intended or accidental. These notions all form a huge part of Performance Art and as such are a great grounding for this exploration. 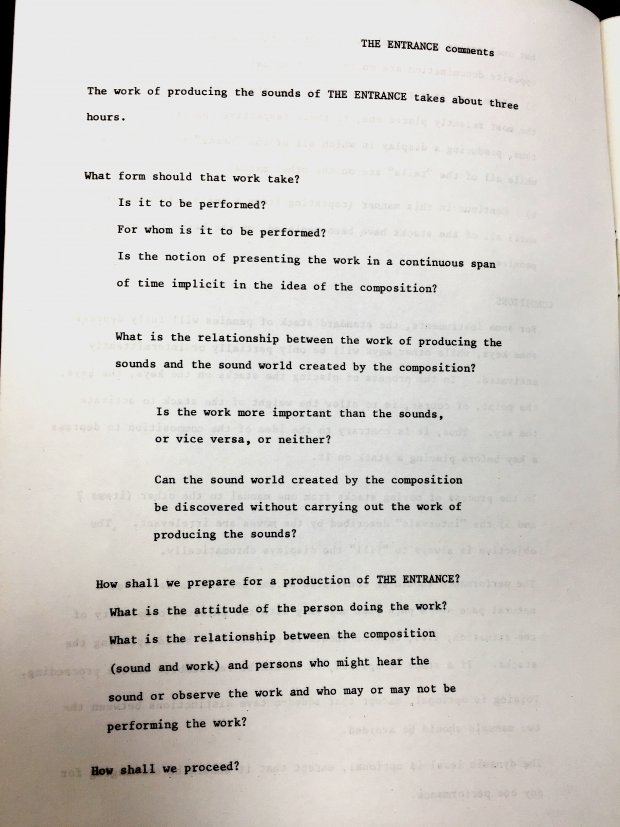 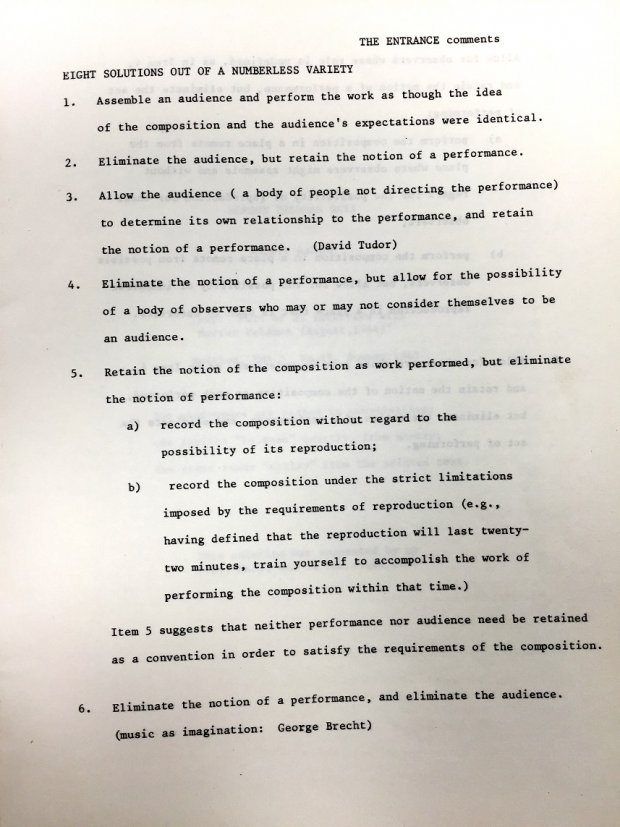 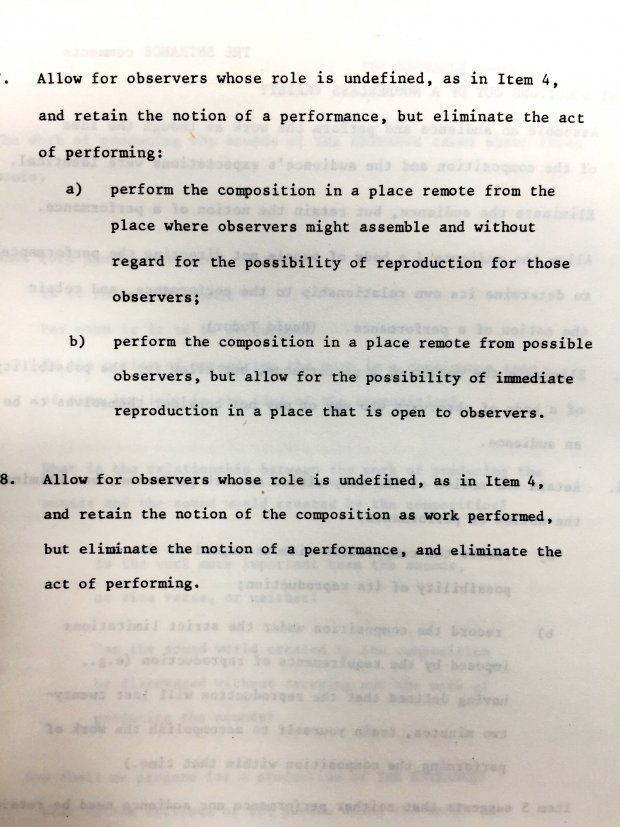 Further on in this Anthology is Robert Ashley’s piece “Morton Feldman Says” and I’m drawn to a quote from Feldman’s interview. In fact, this was the first page I flipped to during my visit. It summed up my mission.

“Everything begins as mystique and ends in politics”

This is a quote from Charles Péguy, French poet and essayist. He continues

For me this is where we begin our tour. What may seem frivolous experimental, niche weirdo musical games, hold the core of our cultural development, explorations of power, and ways of looking at our culture which have developed since the 1970s into core theorems of our time.

Everything begins as mystique and ends in politics - pt.1