"I am very interested in creating a labyrinth and in combining different materials together..." 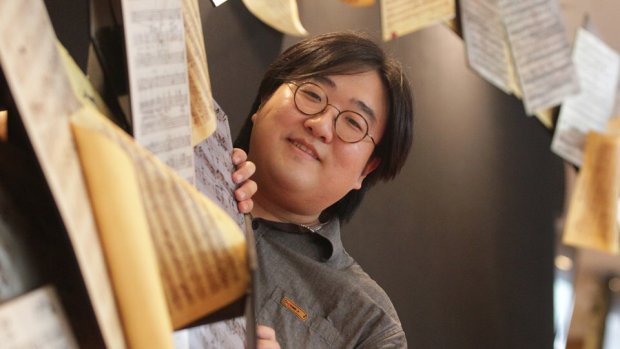 Image of Donghoon Shin by by Chosun Ilbo

Born in Seoul, South Korea, Donghoon Shin studied composition at the Seoul National University with Sukhi Kang, and with Julian Anderson at the Guildhall School of Music and Drama. He also attended masterclasses of Unsuk Chin, Tristan Murail, York Höller, Pascal Dusapin and Johannes Schöllhorn.  His music has been commissioned and performed by the London Symphony Orchestra, Philharmonia Orchestra, Ensemble Intercontemporain, Festival d'Automne à Paris, Orquesta Nacional de España, Ensemble Recherche and Seoul Philharmonic Orchestra, conducted by Péter Eötvös and François-Xavier Roth among others.He has recently received a 10’ commission from the London Symphony Orchestra through the LSO Panufnik Scheme 2016. He is also one of the winners of the 2016 Royal Philharmonic Society Composition Prize. Through the Sound and Music Embedded scheme he has been appointed as Apprentice Composer-in-Residence of the Birmingham Contemporary Music Group for their 2017/18 season.

When I was a teenager I listened to a wide range of music, from Mahler’s Symphonies to Jimi Hendrix. Among them, the most influential for me and my music was the jazz music of the ECM label in 1970-80 such as Pat Metheney Group’s First Circle and Offramp or Keith Jarrett Trio’s live recordings. The Jazz influence appears in my music widely in terms of rhythms, gestures and harmonies. As for classical music, my father was a huge fan and he had a big collection of recordings. Listening to classical music was a natural thing when I was young. I loved Mahler (and he is still my favourite composer). I didn’t know why I was fond of his music but now I know. He tried to combine all the different musical materials (from Ländler to funeral march) to build his own musical world which is full of irony of the intertextuality and it’s exactly what I have been doing as a composer.

You’ve said that literature and cinema inspire your music – tell us a little bit more.

I have been influenced by Jorge Luis Borges a lot. Especially when I was a teenager and Borges was a 'librarian' figure for me (he did consider himself a librarian) of the world of text, introducing many eminent writers and their masterpieces to me, from Homer through Cervantes and Stevenson to Bioy Casares. I am very interested in creating a labyrinth and in combining different materials together as he did.

What are you most looking forward to about your residency with Birmingham Contemporary Music Group?

I believe that working closely with players is always very important for composers. The BCMG is obviously one of the most important contemporary music ensembles in the UK and I have always been intrigued by their programming and performances. I hope to take another step in my development through the Embedded scheme.

Surviving (being original) in the deluge of information.

To write a guitar concerto for Pat Metheney (or Jeff Beck)

I like the word. I think it does not only mean composing music.

You can find out more about Donghoon on his Twitter and Soundcloud.