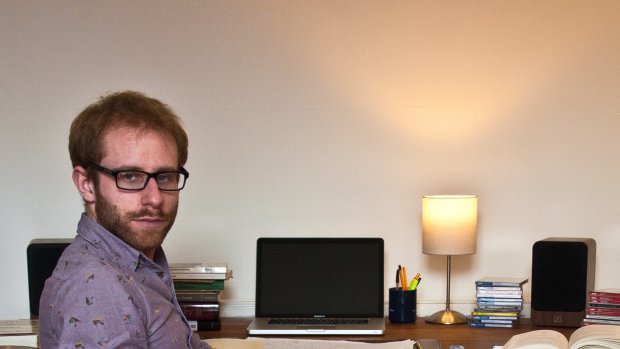 Digital Discoveries: Thomas Butler interviews Martin Scheuregger
"This music is at once organic and surprising: sections lead logically from one to the next, but there are also moments of dramatic change"

On the 25th November 2013, Sound and Music and NMC Recordings for the first time released music held in the British Music Collection for new listeners to discover. The ‘Digital Discoveries’ represent just a small percentage of the work in the Collection but number a full eight volumes of previously unreleased music from this remarkable archive. The releases include a huge range of musical styles from choral pieces by Gabriel Jackson and Richard Baker, solo piano works by Tansy Davies and Luke Stoneham, ensemble works by Philip Cashian, Joe Cutler, Graham Fitkin, electro-acoustic works by Paul Whitty and Sam Hayden and electronic sound art by Katharine Norman and Evelyn Ficarra. Thomas Butler has just completed an Embedded residency with Red Note Ensemble, as composer and producer. He also produces and presents the ‘I’ll Cadence When I Die’ podcast series through which he interviews today’s most interesting composers working in Scotland. For Classical Music magazine Thomas Butler asked some of today’s exciting emerging composers which of the Digital Discoveries mean something to them, and why we should all listen in, then we challenged him to make his own selection. Martin Scheuregger on Philip Cashian's Horn Trio:

TB: Why have you chosen this piece? What did you find compelling about this music and why should I listen to it?

MS: I was first exposed to Philip Cashian’s music when – as a Masters student at the University of York – the Chimera Ensemble performed his Chamber Concerto and I played one of the percussion parts. I was struck by the work’s focus, but also by its musical diversity. After this I became increasingly interested in Phil’s music and the Chamber Concerto ended up forming a central part of my final MA thesis. Written three years after the Chamber Concerto (1995), The Horn Trio (1998) has the same vitality and sparkle that first grabbed my attention: as soon as you switch it on, I’m sure this recording will grab your attention too. The opening section presents a contorted but captivating melody in emphatic unison between the three instruments. This melody only starts to splinter after around half a minute, at which point I cannot help but wonder how or if the instruments will reconcile their differences and come back together: the rest of the piece is the space where this argument is worked out.

TB: As a listener, how does the piece unfold? Are there any surprises along the way?

MS: This music is at once organic and surprising: sections lead logically from one to the next, but there are also moments of dramatic change, the sudden silence which follows the utter energy of the work’s final part being the most drastic of these. These changes throw light onto the sections they divide: the fast outer parts are put into perspective and made all the more exciting by the stasis at the middle of the piece. After the unison melody of the opening, a section of more fractured music follows where each instrument has its own distinct character. Always highly melodic, the instruments work in every different grouping, with lines both interlocking and interrupting each other. The second half of the movement settles at a much slower pace as broader gestures and long lines dominate: here, we are in the eye of the storm. The piano comes to the fore with a chorale-like passage characterised by harmonies reminiscent of Messiaen, before it exchanges responses with the other two instruments. Soon the violin presents a prominent, plaintive melody high above the horn and continued chorale of the piano. The second movement is a return to the frenetic pace of the opening as we re-enter the storm. Once again each instrument appears to be following its own melodic path, but halfway through, the piano takes the spotlight with a relentless melody which pushes the movement to its final section. Here, violin and horn seem to be united again before each instrument takes its own route to the trio’s thunderous conclusion.

TB: As a composer, how does the piece, or any element within the piece, relate to your own output? Are there any ideas here that you’d like to steal for your own work?

MS: The Horn Trio has an amazing sense of clarity. Instrumental roles are clearly differentiated, giving a sense of character to the parts but also allowing a logical layering which lets the listener pick out distinct strata in the music. The structure is also well defined, and Cashian is not afraid of sudden and dramatic changes. Having said this, each section has a momentum which pushes it onwards, giving a constant sense of building to a climax and embruing the music with infectious vitality. This clarity of purpose is something I strive for in my music, and although I go about it in my own way, it is something I have learnt from listening to Cashian. The importance of melody and line is also a strong element of The Horn Trio, and the balance of rhythmic playfulness and melodic invention is something I hope to achieve in my own work. The simple but incredibly effective trick of opening with a forthright unison melody is something I may even borrow in a piece of my own at some point soon!