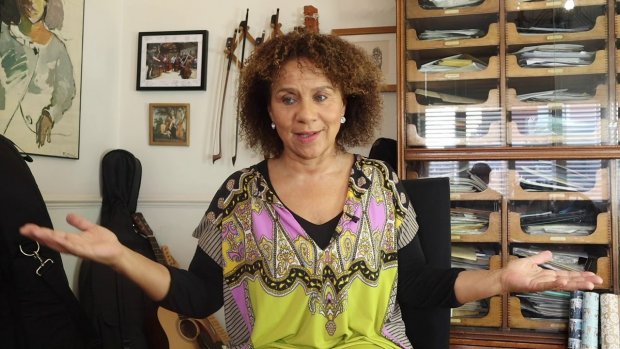 Des Oliver - Identity and the Anxiety of Influence

Join composer Des Oliver as he explores issues surrounding black identity and the breadth of new music produced by black composers across the UK.

Identity and the Anxiety of Influence

This curated documentary series by composer Des Oliver, explores issues surrounding black identity with the breadth of new music produced by black composers across the UK, under the theme 'identity and the anxiety of influence'. My digital gallery is a showcase for the diversity of thought, attitude, creativity, and musical language among musicians who are black. Based on interviews with composers across the UK about their work, lives, and creative process, this mini web-series offers some alternative role models in the arts for future generations. Watch the whole series below or explore individual episode further down this page.

Do you, and should you, draw influences from your cultural heritage? Five UK-based composers discuss the relationship between their cultural backgrounds and artistic identity, and the extent to which their heritage and ethnicity manifest in their musical language.

Ep.2 The Anxiety of Representation: What Does It Mean to Be a Black Composer?

This episode examines what it means to be a ‘black’ composer, whether such a thing exists, and we consider if labels intended to define certain groups are a help or hindrance to creative artists in the classical music industry. The episode examines the problematic, and often unintended, consequences caused by imposed definitions, and considers its impact on those being defined.

Ep.3 The Anxiety of Representation: Tunde Jegede – Heritage and Definitions

This episode explores the music of multi-instrumentalist Tunde Jegede, and his life-long journey towards achieving a synthesis between Western classical music, African classical music, his influences from the Griot tradition, and music of the African diaspora. He discusses the artistic challenges navigating between two worlds, culminating in an authentic musical language which both embodies and transcends his dual heritage: the result of a cross-pollination between his experiences as a Kora player and as a classical cellist.

Four composers, along with the International bassist Chi-chi Nwanoku, OBE, Founder and artistic director of Chineke!, Europe's first majority BAME orchestra, discuss the practical challenges and recent successes of BAME representation in an industry where black and minority ethnic musicians are underrepresented.

Ep.5 The Anxiety of Influence: Music and Memory

Composers Tunde Jegede, Daniel Kidane, Dominique Le Gendre, and Philip Herbert recall their earliest experiences with music, and music making. Each consider the extent to which familial tastes, and first encounters with live performance have impacted on their musical preferences and practices as composers.

Ep.6 The Anxiety of Influence: Philip Herbert – The Virtues of Eclecticism

Philip Herbert discusses how his formal instrumental training at home, school, and later at the Leeds college of music, contributed to his aesthetic and outlook as a composer. Herbert has always maintained that his eclecticism, and interest in experimentation derives from his early exposure to a spectrum of musical styles, genres and practitioners from various cultural backgrounds.

His music is very much a melting pot of styles, which include influences from the African American Negro Spiritual, the dance rhythms from the Caribbean and Latin-America, American Minimalism, Soul, church and choral music as well as a lyrical, distinctly English, approach to melodic writing.

Ep.7 The Anxiety of Influence: Dominique Le Gendre – Music from the Islands

From her workshop, located in the heart of Brixton, Trinidadian-born composer Dominique Le Gendre discusses her early musical influences and experiences singing in choirs and playing music in Trinidad, and then at the Conservatoire de Paris in France with French guitarist, composer and conductor Ramón de Herrera.

From an early age Le Gendre was exposed to the plays and poetry of Derek Walcott.

We discuss several of her own theatre productions, including Jab Molassie, inspired by Stravinsky's "Soldier's Tale" with libretto by Double Bassist Caitlyn Kamminga, as well as her Opera, Bird of Night, conducted by Yuval Zorn in 2003 during her time as an associate artist for ROH2.

Ep.9 The Anxiety of Impotence: What is Inspiration?

How do you start a piece? Do you need to achieve a creative state in order to compose? What do you understand by the term inspiration, and at what point does your music take on a life of its own? Tunde Jegede, Daniel Kidane and Dominique Le Gendre address the role of inspiration in their music and consider whether they believe the music they write is being “received” or something that already exists which they are uncovering.

Ep. 10 Daniel Kidane – Being True to Yourself

New music composer Daniel Kidane discusses his musical influences, and the influences arising from his dual (Russian and Eritrean) heritage. Kidane considers his formal training in Russia and the UK, and the impact these experiences had on his voice and ethos as a composer today.

Des Oliver discusses his musical influences, what inspired him to become a composer, access to education, experiences working with performers, interpretation of new music, and hearing his music performed.

Daniel Kidane, Philip Herbert, Dominique Le Gendre, Tunde Jegede and Des Oliver address whether composers of new music have an obligation to push boundaries and examine what is meant by that term.

Des Oliver - Identity and the Anxiety of Influence