"As far as modern classical music composition goes, I think even attempting to be political is a challenge to some discriminatory structures."

Every year, Sound and Music shine a light on the work of the composers who are currently in residence on our Embedded and Portfolio programmes. These are our New Voices of 2017.  They are creating new, exciting and innovative music, across disciplines, all over the UK. 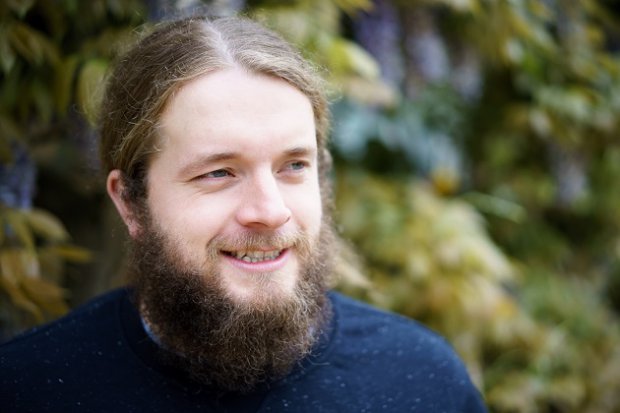 British-Welsh David John Roche’s music is celebratory, intense, and bright – consciously in opposition to the circumstances of the world in which it is written. Roche is politically motivated and strongly influenced by the themes of abandonment, alienation, and violence. He believes that there is new, undiscovered compositional territory to be found through the musical representation of marginalized voices, that the clearest, most direct way of developing new modes of expression and representation are to be found in the syntheses of the vast, varying methods of musical construction available to composers writing music today.

When I was growing up in South Wales it seemed like everyone composed and played in a band - music was everywhere, it meant a lot to the people that played it, and it felt natural for me to follow suit. I performed in loads of rock and metal groups and, off the back of that, I became obsessed with shred guitar, the culture associated with it too; hours and hours of metronome-oriented practice, loads of music theory, and tons of progressive rock and metal music. Being part of several bands meant I had opportunities to write music – which was great - but it wasn’t until I had easy access to MIDI sequencers and cheap recording equipment that I began to indulge my own very fiddly, entirely personal compositional interests. I penned my first orchestral piece when I was 12 and I spent most of my teenage years writing extremely long songs filled with super-technical electric guitar solos, synthesizers, and absurdly difficult heavy metal drum parts. I knew quite early on that I wanted to be a musician so I sought to advertise my music, drank up as much knowledge as I could, applied it, and eventually - after numerous failed applications - I received a professional commission during the first year of my undergraduate degree.

I should add that without the free music tuition I received through the state school system, the free study I undertook with Tredegar Town Brass Band, and an environment filled with supportive people (including an incredible music scene and a stable family) I would never have been able to pursue my passion. Sadly, much of the route that I took in to composing has now been closed off to those lacking the financial means to purchase it. It breaks my heart to know that less fortunate people do not have access to the types of opportunities that granted me a place on the path I am treading today.

You’ve said your work is “influenced by themes of abandonment, alienation, and violence”. How does this manifest musically?

It tends to manifest in one of two ways. Firstly, my music is often celebratory, bright, and optimistic - purposefully in opposition to the circumstances of the world in which it was written. For example, in my composition Ozartmay I was celebrating the essential elements of Mozart’s style as a form of protest to BP’s funding of the Royal Opera House’s 2015 production of Don Giovanni and the violence the purchased social license allowed BP to inflict. Ozartmay is buoyant, light, and bright in opposition to the unpleasant subject matter that inspired it. In my composition Wealth and Infancy I am celebrating the excitement of learning and being drawn to music as a young person. This work has aesthetic beginnings in considerations of the poverty that prevents many young people and families having access to these opportunities. Wealth and Infancy – a joyful, rhythmic piece of music - celebrates what could be.

The themes of violence, abandonment, and alienation are also implemented in more literal and attacking manners. The contrast between the beautiful countryside and the alienated, frightened, and impoverished people living in South Wales – of which there are many - inspired the bleak, isolated musical voices of my compositions Estuary Airs and Another Estuary . Musical representations of the poetic ideas are at the forefront of these much more dissonant compositions; contorting and exposed lyrical lines contrast with brutal, stabbing musical ideas; weaker, debilitating voices are swept away by more organised, clinical blocks of sound; broad, lonely melodies wash through the music. These compositions are much clearer, more obvious representations of the themes in question.

You’re interested in the “musical representation of marginalised voices”. What’s your approach? How does your work challenge the mechanics of discrimination?

As far as modern classical music composition goes, I think even attempting to be political is a challenge to some discriminatory structures. Classical music isn’t as accessible as it should be and we can’t do anything about the various inequalities plaguing our society if we are unwilling to try and talk about them. With that in mind, I am really interested in creating music that looks at poverty and the reasons behind discrimination. I am particularly concerned with how this relates to where I grew up (South Wales), where I now live (Cambridge), and the UK in general.

With respect to the musical representation of marginalised voices, I spend a lot of my time finding different ways of relating seemingly unrelated musical materials. I feel that a diversity of compositional methods and ideas is essential when making an attempt to represent the diversity and complexity of the cultures that I am aesthetically concerned with. Composers should try to make use of the phenomenal range of musical materials available to them! For example, in my work Ten Acre Riots! for solo piano one can hear all sorts of different methods of musical organisation transforming and melting together; microtonal bends, spectral sonorities, interval cycles, quasi-tonal melodies, multiple simultaneous tempi, serial structures and loads of other bits and bobs. All of this is in service of representing and re-representing a primary musical idea; each different statement of this idea represents the sounding of a new opinion on the matter this primary musical idea represents.

What are you most looking forward to about working with the London Graduate Orchestra?

I am most looking forward to getting beneath the surface of an orchestra that is willing and brave enough to fully engage with experimental music - it is going to be utterly awesome! I have never had the opportunity to work with an orchestra in this manner and I am dying to to see how the process of collaboration with an ensemble of this size unfolds.

We live in turbulent times. So, if nothing else, there is certainly plenty of inspiration! A lot of the recent British political events have brought up old memories and feelings relating to where I grew up, where I studied, and where I developed as a musician. So, for me, 2017 has been about looking back to when I was younger to make sense of where I am now, thinking about how my music has changed, and using these recollections to strengthen my aesthetic and my music – right now I’m all about moving forward and building on ideas relating to history, memory, and youth. I also feel like I spend a huge amount of time writing e-mails…

What is the new music scene like where you live?

Cambridge’s music scene is wonderful – it has the perfect balance of grizzly clubs and fancy venues. There’s a good spread of rock and classical music too (not just college choirs!) and you’re only 40 minutes out of London. Cambridge is great; it’s such a soft and fluffy city.

Mastodon’s ‘Jaguar God’. I have listened to something off their new album Emperor of Sand almost every day since it was released – it’s so good. I’ve also recently discovered Marmozets, re-discovered Anna Meredith’s Varmints, and I have been spending a lot of time studying Bruno Mantovani’s Jeux d’eau and Unsuk Chin’s Piano Concerto, both of which are absolutely spectacular compositions.

Barbara Hannigan, right? I don’t think one can listen to any of her performances and not be inspired. I’m also a huge fan of Guthrie Govan; I think he’s the most interesting guitarist working right now so it would be amazing to write something for him.

Playing guitar – shredding is still cool! Aside from that I am working towards a doctorate in Music Composition at Downing College, University of Cambridge. I also work as a score producer and I am currently editing scores and parts for the premiere performance of a section of Lizst’s unfinished opera as part of the BBC Cardiff Singer of the World Contest 2017, this is alongside a separate exciting orchestral project with the fantastic musician Paul Roland. I can juggle too, I’m quite good at it.

I think of myself as an extremely open-minded composer. I am always looking to collaborate with poets, artists, dancers, other composers, or anyone with an interesting, wacky creative proposal. Everything is worth a try!

David is in residence with the London Graduate Orchestra as part of Sound and Music's Portfolio sheme. Read about it here.