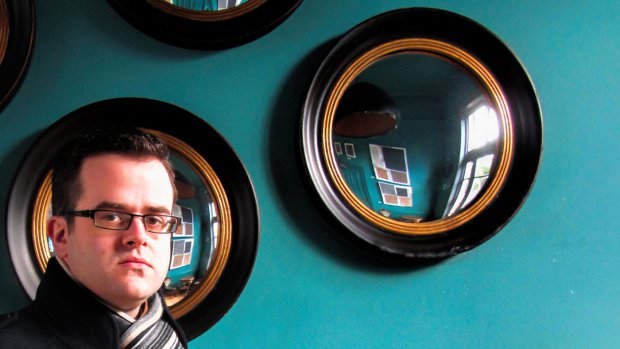 David Coonan on Portfolio with the BBC Symphony Orchestra

“It’s a kind of searching journey through radiance and resonance."
New Voices

Every year, Sound and Music shine a light on the work of the composers who are currently in residence on our Embedded and Portfolio programmes. These are our New Voices of 2016. They are creating new, exciting and innovative music, across disciplines, all over the UK.

David Coonan divulges the fascinating and powerfully thought-provoking implications behind his piece Vain Prayer, which was premiered at Maida Vale studios on the 24th March as a part of his residency with the BBC Symphony Orchestra. Whilst confessing that he did not intend to convey a moral point within the piece, Coonan describes in perfectly balanced detail how he allowed his philosophical and emotional intentions to manifest within the music. “It’s a kind of searching journey through radiance and resonance,” he writes, as he reflects on how his orchestral style has developed as a result of the residency. And he’s right – Vain Prayer is a sonic reckoning of a poignantly charged story, which Coonan approaches tenderly and with refined finesse…

I find this a surprisingly difficult question to answer! I think others are in a better position to give descriptive sentences, but, since given the push, I hope my music could be described as arresting, emotionally charged, vibrant, and in its own way earnest and necessary. I think the need to write music comes from a desire to give shape and form to things one feels deeply but could not express in words, and to share those things with others so they might find some solace or feeling of empathy. It’s a lofty ambition, but an important one – I hope my music might do that!

What attracted you to apply for the Embedded programme with the BBC Symphony Orchestra?

Quite simply, I love orchestral music and I love writing for the orchestra. As a cultural institution, the ‘orchestra’ gets quite a lot of bad press (the overly formal aspects of the concert hall, the penguin suit attire, the often formulaic feeling of concert programmes etc.), and much of this is warranted. However, at the core of it is often phenomenal music, and I’ve always found orchestral music the most beguiling, complex, and beautiful medium of musical expression. There’s something about the ‘collective act’ of orchestral playing I find captivating. That so many people can do this extremely mentally and physically challenging thing together, and go even further in making it poetic, beautiful, and moving – it’s profoundly beautiful. Also, the BBC Symphony is second to none when it comes to working with living composers – it’s their bread and butter – and they’re an ideal orchestra for a young composer to write for.

Your Embedded piece is called Vain Prayer and you write that it’s based on the King Midas legend. Where did the title come from, and how is the piece inspired by this legend?

The title comes from a passage in Aristotle’s Politics where he talks about the difference between the monetary value of a thing and it’s actual ‘use’ value (I think he gives an example about shoes – how the value of shoes could be a certain number of coins, but the real value lies in how they protect your feet). His point is a moral one – one must recognise the distinction between these conceptions of value, and place more emphasis on ‘real’ value rather than worldly value. He phrases it in the question ‘how can that be wealth of which a man might have a great abundance and yet perish with hunger, like Midas in the fable, whose vain prayer turned everything that was set before him into gold?’ Although I definitely don’t have a moral point to make in the piece I thought the description of the plight of Midas as a ‘vain prayer’ was a really beautiful description, and knew instantly when I read it that it would be the title for the piece.

I’m also really keen on Nathaniel Hawthorne’s version of the myth – The Golden Touch, which appears in his ‘Wonder-Book for Girls and Boys’ – which I’ve known since I was a kid. In this version, Midas has a daughter named Marigold, who, in a moment of pity for her father, runs to embrace and comfort him only to be turned into gold. It’s an unbearably sad moment, that Hawthorne writes with such deft and simplicity – it made me cry when I first read it and remained just as beautiful when I re-read it for this piece. There’s a beautiful illustration for Hawthorne’s collection by Walter Crane that captures this moment, which was definitely a big influence. It’s a striking metaphor for the constant hollow and disconsolate feeling that worldly obsession can bring – be it obsession with money, one’s looks, one’s intellect, or anything else. It was this type of sadness I was hoping to get at with Vain Prayer.

Can you expand a little on how this idea materialises in the piece?

The piece is a choreographic poem in two tableaux, that is to say I had it in mind that the music would be danced to as I was writing it. As such, it’s quite pictorial, although I’ve not made this explicit in the score and were it ever to be choreographed I suppose I’d be more interested in abstract, as opposed to narrative-led, choreography.

When I was writing it I had in mind quite a number of musical reference points, two of the more obvious ones being the ballet scores of Ravel and some of Messaien’s chamber works. There’s a fluid type of movement in Ravel’s ballet works that were a definite influence, and also an aspect of stillness in Messaien’s. The first tableau is driven by an insistent and obsessive lyricism, where the lines are constantly searching for conclusions they never properly reach – all set within a glittering haze of constantly moving micro-polyphonic details. The second tableau is almost the opposite; there’s a stillness and frozen-moment aspect to it wherein melancholic lines float around a bell that sounds to the very end. The switch from constant movement to stasis is designed to make the hollowness of the second tableau all the more affecting – the way Midas’ obsession for gold lead to his own devastating loss.

What has been your biggest inspiration as a composer – and how does your creative process work with such inspirations? I.e. How do you compose?

I don’t think I’ve ever had a sudden moment of inspiration where a piece arrived in my head fully formed. It’s more that certain ideas float around and maybe coalesce to give a sense of what a piece might be about – with Vain Prayer, I knew I wanted to do something about Midas and that I wanted the end feeling to be desolate and sad, but I learned more about it how it would happen the more I worked on it. The initial idea suggests musical materials and larger structures, which in turn gets rolled out and explored during the process.

Describe your experience on the BBC SO Embedded programme. What were the particular highlights of this Embedded residency?

I learned a massive amount from this project, in lots of different ways, and both the orchestra and the whole team at the BBC SO were incredibly supportive and challenging in a positive sense. It’s fantastic to have one’s work performed and broadcast, and gives you a lot of confidence as an artist that a group such as the BBC SO are excited to work with you and invest in your work.

I think the highlight of the residency for me was the time that I got to spend with the musicians, who are truly world-class. I was treated like a peer, and everyone was very collaborative – Pierre-André Valade (the conductor) was incredibly dedicated in his collaboration and preparation. As a composer writing orchestral music, you spend so much of your time writing it in solitude that when you get into a room with musicians playing your work it’s re-fuelling. We had two workshops with the orchestra, which made the whole composing process extra energised.

At the start of your residency, you wanted to develop a more “personal orchestral style”. How do you feel about this aspiration now the BBC SO Embedded programme has finished?

I’m delighted to say I definitely feel I’ve taken a step forward with my orchestral writing thanks to this programme. I’m lucky that this is my third orchestral project to have received a performance, and at the time of starting this piece I knew enough about the challenges of the medium that I could find a more individualistic approach. As a result, it’s quite different to my previous work.

In particular, the specific nature of my percussion writing has changed, thanks to collaboration with Alex Neal (BBC SO Principal Percussionist). Alex was extremely helpful in discussing the percussion writing, giving his own critical take on what was effective and what wasn’t, as well as guiding us through the Symphony’s collection of percussion instruments, which, since the tenure of Pierre Boulez, is a veritable Aladdin’s cave of percussion treasures. Working with him throughout the whole time of the programme helped me develop a more personal sense of those instruments, and their context within my orchestral soundworld.

Both in terms of the quality of the orchestral sound, and the structure of the piece as a whole, the percussion part is absolutely integral to this music. It’s a kind of searching journey through radiance and resonance, full of percussion like vibraphone, glockenspiel, tam-tams, bell-plates, pitched gongs, and others all adding to a kind of burnished glowing sound.

Do you have any composers/artists, that you’ve been excited by recently, you could share?

I’ve recently had a summer residency back home at the Contemporary Music Centre in Dublin, which afforded me a wonderful opportunity to live and work in the heart of Dublin city. The centre houses a huge library of contemporary Irish-born and Irish-based composers, and I’ve been making my way through quite a bit. I’ve been really getting into the work of Kevin Volans and Jennifer Walshe – both of whom are very different composers to myself and to each other. It’s been rather refreshing to delve into their work, particularly Jennifer Walshe who is President of the Aisteach Foundation – a fun place to get a feel for her extraordinarily imaginative art. I’d also suggest listening to Volans’ riotous Piano Concerto No.2 “Atlantic Crossing” for some jaw-dropping piano playing from Marc-André Hamelin.