Daniel Pioro of CHROMA on the work of Na'ama Zisser
"The textures of Na’ama’s work overlap and coat one another, hard edges and softer washes..." 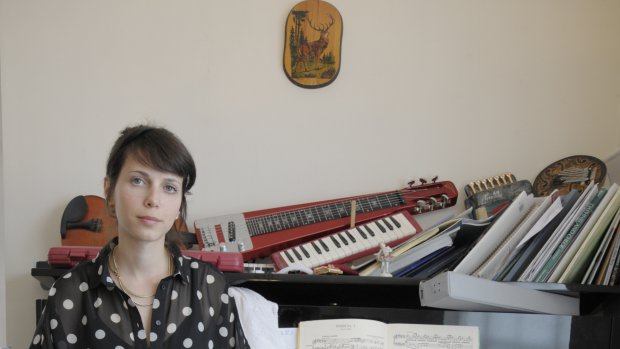 A morning of revelation. Na’ama Zisser on Soundcloud. Untitled long. And a near-breathless 12 minutes and 18 seconds is followed by days of wondering why sounds so new to me seem so familiar.

I encountered Na’ama’s music for the first time this year at the Tête à Tête Opera Festival held at King’s Place. Performed by my beloved CHROMA, The Last Seed - one of two miniature operas being performed that night - speaks of Narcissus, delicious and doomed. This most influential of ancient mortals - the spiritual leader of the Cult of Selfie - realises that he has not truly lived until he eats the last pomegranate seed. Unafraid of silences, the voices of Richard Bryan, Meili Ii, Craig Jackson, Tristan Landymore and Amar Muchhala crash against the instrumental drones. Waves and undulations. Na’ama conjures a fragmented and fragile sound world, yet one that throbs and hums insistently from the very beginning of its existence.

Narcissus, delicious and doomed. What an apt description for The Last Seed. It made me think of those majestic short stories that are doomed - at least in the publisher’s eye - from the outset. Too short to be published in anything other than a large, marketable collection, they wither away on the author’s bookshelf, glowing brightly for a while amongst much larger, decorated novels before breathing a final, beautiful breath. I hope this work avoids that fate. It stands alone and glorious, much like poor, tortured Narcissus in his brief, sickeningly beautiful life. The Last Seed groans with the voice of a larger, weightier work in the body of something young and momentary.

Na’ama seems to paint sound. In Drowned in C, Na’ama scrapes her sound like the thickest, most unctuous of oils onto her canvas. A granular canvas, cracked with age, a base so dry that as the notes flood down onto it, as we perceive the sound, it seems as though we absorb it. As I listen to it I am reminded of Auerbach’s “Head of J.Y.M. II” and of Kosoff ’s “Head of Mother”… two works that make me both thirsty and sated at the same time, and happy in a way that only a work that is truly content in itself can make me.

In the sampled and acoustic sounds of Strings 2010, I am reminded of Kiefer’s trees. Lead, wood and plaster sharing space with oil, emulsion, acrylic and charcoal. The textures of Na’ama’s work overlap and coat one another, hard edges and softer washes. This is a work that, based on one recording alone, I can imagine being performed site-specifically. One part of it, acoustically, the other part by a sound-designer nurturing the “live” sound for the space. The late Jonathan Harvey once told me that he dreamt of music that treated the acoustic and the electronic as equals. I cannot help feeling that he spoke of music like Na’ama’s in that moment.

Kiefer’s work has often focused on myths associated with trees and wood, such as that of Yggdrasil, the Norse ‘World Tree’ that shelters the universe and with this final reference I come back to Untitled long. Maybe that is the key to why I feel as though Na’ama’s sound is so familiar to me. It is an ancient sound, full of mythology and tales. There are the washes of fragmented lullabies hiding behind the sounds of what we must have first heard when we came into this world.

I wait for more music by Na’ama, I wait to hear it in galleries and abandoned spaces and packed Opera Houses. For now, I will listen to it on my iPhone. For now.

Daniel Pioro of CHROMA on the work of Na'ama Zisser