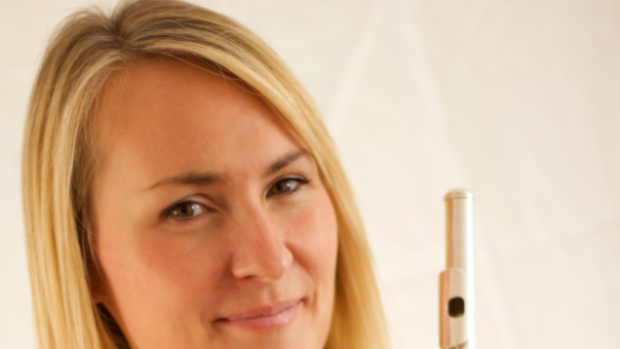 Sound and Music is the national charity for new music in the UK whose work includes composer and artist development, audience development, touring, information and advice, network building and education while one of the aims of Unlimited Impact is to focus and deepen the discussion and debate around work by disabled artists.

Throughout this series of articles - in addition to interviewing some key figures and organisations working professionally in the area of music and disability – I will speak a little more about what I do, how I lost my hearing and how I survive as an artist and a human being in this deafening and disabling world (yes!).

However, the focus of this blog is Essex-based Ruth Montgomery. Ruth is a professional flautist, composer and educator whom I first came across several years ago when I was researching and developing a new music-theatre work that included performative BSL (British Sign Language) live music, animation and poetry.  I wanted to interview Ruth for this series to learn more about her, ask her some questions I’ve been wanting to ask her for a while and to introduce her work to a wider audience.

Here is Ruth playing with the London Philharmonic Orchestra

Those of us who are D/deaf or hearing impaired usually are so to very different levels. While Ruth and I are both D/deaf musicians and composers – our experiences of deafness is very different. Like anything else, there are gradations of deafness. Because there is not a commonly used or quickly understood code of deafness we do our best to describe our deafness in ‘long hand’ because we understand how important clear communication is and by giving as much information as we can, we improve our communication with others.

In the spirit of this, I began by asking Ruth ‘How deaf are you?’ which is not as rude a question as you might have thought...

Ruth:  I am profoundly deaf.  I hear nothing. When my little boy speaks in my ear I don’t hear anything at all, but when he shouts I can hear a little bit with my natural, residue hearing.  I can’t hear the fire alarm or the hoover either.  However with my analogue hearing aids on in both ears it gives me access to sound.  I hear the flute really well and know the character of every note.  I can hear pitches as high as the piccolo gives as well as the lowest note on the piano.

Ailis: Did you ever attend specialist education?

Ruth: When we lived in Wanstead (London) I went to a local primary school with my 3 other brothers.  I struggled badly.  I spent about 4 years sitting in class having very little understanding of what the teacher was saying and trying my hardest not to copy other children’s work.  Just before I was 10 we moved to Chelmsford and there was a local primary school with a unit for deaf children.  I spent half of the time there catching up on English and Mathematics. For the first time I was learning properly, and the teachers of the Deaf there told my parents about Mary Hare School in Berkshire, a boarding school for Deaf.  When I got a place there, there were only 10 children in my class (10 in each year x 3) and the classes were so accessible with visual learning aids.  I spent 7 very happy years there as a teenager learning a lot of subjects.

Ailis: What is your speech like? When you are not in the company of other BSL users do you use your voice?

Ruth: I think my speech is fairly understood by hearing people, but I do struggle with some words - for example  - stick/six, soup, summer (trying not to say stummer) also my son didn’t know what I was saying when I was talking about ‘sailing’.  I think anything that beings with a ‘S’ will get me in word trouble – also wasp! Don’t make me say it!

Ailís: When did you start composing?

Ruth: I started when I was doing music GCSES and did more when I did music A levels.  I half-enjoyed it.  When I was at Royal Welsh College of Music, I did a lot more as it was part of the course – most of it was harmonising and modulating stuff.  However, when I started making up some studies of my own and writing stuff that links to imagination I really enjoy it.  I started to forget about the traditional rules that came with music and liked to be on the modern side of things.  I particularly like Takamitsu pieces, Varese Density.21.5, Debussy’s Syrinx, and works by some modern composers.  I find classical and Baroque organised and structured – I don’t mind, but this isn’t my style of writing, although I take ideas from that as well.

Ailís: What barriers have you faced as a deaf musician?

Ruth: Peoples' attitudes.  I would say challenges – my challenges were when I was 18 and wanting to get into a music college they were quick to highlight areas of the course I’d find difficult such as aural assessments, playing in an orchestra, and I find myself challenging them to think of positive and alternative ways  and didn’t get a place.  I studied flute with a London professional for 2 years after grade 8 and re-applied, and this time at the audition I learned how to talk about my passion for flute playing, and that deafness is no bar to music.  I was overjoyed when I got a place at the Royal Welsh College of Music and Drama.

Ruth playing one of her own compositions with Evelyn Glennie

Ailis: I know you are also a very experienced teacher and want to ask how your D/deafness effects your teaching? And who do you teach – are they both hearing and non-hearing?

Ruth: I teach hearing students mainly at the moment. I don’t think it bothers them that I am a deaf teacher, they all know, and I think they are aware of my achievements and don’t question it.  I’ve been lucky, I’ve taught so many in 15 years.  It is workshops where I meet deaf children and I think they are happy and surprised that I can drive a car, play the flute and work with hearing people.  We need more role models to show them that anything is absolutely possible.

While people’s first thoughts about music is that music is about hearing sound. There’s no mistaking it – sounds travels to the listening ear and captures their attention…and imagination. The word ‘music’ after all according to Wikipedia ‘is an art form whose medium is sound’. However, Wikipedia then goes on to say – “Its common elements are pitch (which governs melody and harmony), rhythm, and its associated concepts tempo, meter, and articulation, dynamics, and the sonic qualities of timbre and texture.” This is exactly where I get my back-up as to what music also really is.  If you are at a favourite concert watching and listening to rock, pop, classical, jazz for example and seeing these musicians perform on stage, or as a soloist even – they are physically producing all of these elements that make up sound.  A performer has a job of activating all areas in their brain to THINK about how they wish to interpret ‘sound’ stories with their instrument.

Ailís:  What barriers do you presently face?

Ruth: That companies do not make analogue hearing aids any more as it is the digital revolution.  Digital aids are just awful, they cut off the high and low pitches, and if I play a fast chromatic scale on the flute and stop playing, the digital aid is still trying to catch up with all the sounds and goes into freeze mode.  I have complained about that for many  years with hearing aid companies but I think I am in a minority so it gets dismissed.   I also feel annoyed that audiologist and sound engineers try to talk you out of being delusional about hearing sounds, but I tell them that I’ve played all the Mozart concertos at college and a lot of modern pieces with high notes but it’s like ‘Oh right’, not a lot they can do about it.

A passion that Ruth and I both share is a huge interest in the visuality of music. Ruth is also the Creative Director of Audiovisability which is a project developed by her to explore the visualisation of music and sound by deaf artists working in different arts media accessible to hearing and deaf audiences in different ways.

EXPRESSION II by Waseem Kotoub for Flute and String quartet

Within Audiovisability there is a particular focus on capturing visual information of music through collaboration with other deaf artists across a range of disciplines including photography, film-making, sculpting, acting, textiles, Sign Language, live music and musical compositions.  The aim being to lead the spectator through a thoughtful and deeply integrated arts experience, portraying music in a visually compelling and refreshingly humanistic way.

I asked Ruth about how Audiovisability came about and her ambitions for the project:

Ruth: I wanted to search ways where my Deaf friends can enjoy a bit of music too.  I also attended so many concerts in my life where it is not accessible at all – just listening to music, and I wanted to experiment with sign language, texts, visuals, so see can be made accessible.

We are currently developing a new project, The Unheard World will explore the experience of deafness, migration, displacement, loss and language from a D/deaf perspective working with artists and their stories from Syria and the Middle East. The project will be led by D/deaf artists and deaf young people, experimenting with BSL live and digital access streams and showcased at several festivals.