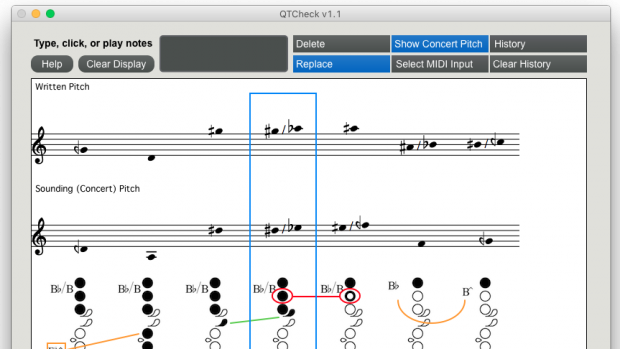 Composer Jonathan Pitkin describes the process of creating a bespoke software system to help him write for quarter tone flute.

It almost goes without saying that the past few decades have seen unprecedentedly rapid advances in the power, portability and affordability of digital technology. For composers, this has brought a wider range of creative possibilities within easier reach than ever before, whether these have to do with sound creation and manipulation, or interactivity and AI.

Perhaps a little less glamorously, however, there are still some methodical, time-consuming compositional tasks – very much the preserve of ‘classical’ computing – which can be handed over to a computer in order to save time and energy that can then be spent on something else. Where this is the case, technology can be seen to stimulate creativity in a different, more indirect way, by taking away some of the heavy lifting and freeing the composer to get on with formulating, developing and shaping ideas.

I’d like to share an example of a recent occasion when I found such digital assistance to be particularly helpful. I wrote Multi(poly)phonies, for quarter-tone alto flute and guitar, for Carla Rees and David Black of the ensemble rarescale in 2016. (Carla plays instruments made by Eva Kingma, which are able to produce quarter-tone pitches with the same consistency and reliability as the notes of the chromatic scale, thanks to the addition of a number of extra keys.)

One of the things I wanted to try to do in this piece was reverse (or at least rethink) the roles these instruments would conventionally be expected to play in a pairing of this kind. So instead of putting the (usually) monophonic instrument – the flute –in the melodic foreground, and using the polyphonic one (the guitar) to provide harmonic context, I thought about ways in which the flute might instead be made to play the supporting role. This involved giving particular consideration to the question of how it might articulate and sustain chords (or at least to give the impression of doing so).

One of the ideas I came up with involved giving the flute an equivalent of the guitar ‘strum’: an arpeggiation through the notes of a chord, executed with enough speed for them to sound ‘as one’ rather than as a melodic line or gesture. But since I also wanted to take advantage of the possibilities of the Kingma system by making these chords microtonal, I quickly discovered that I would need to take some extra care to ensure that the specific notes I wanted to use could be played quickly enough to achieve the effect I had in mind.

Learning about the practicalities

For whereas when writing for professional woodwind players using conventional instruments, composers need not often give too much thought to the practicalities of how each note is fingered – we have become rather spoilt by the high standards of dexterity which allow performers simply to play back whatever we have written while leaving us none the wiser as to the actual physical movements involved – the Kingma system demands a little more awareness of which particular successions of pitches are possible to execute at high speed, and which aren’t.

To reach some keys, I learnt, the hands must move away from their normal positions; others sometimes need to be approached by sliding fingers over from adjacent (conventional) keys. All of this requires extra split-seconds which would prevent the arpeggiation effect from being heard in the way I intended.

Testing, and an opportunity…

To help composers writing for Kingma system instruments, and make others more likely to consider doing so, I’ve made this tool (called QTCheck) available for free from my website. For those who don’t have Max/MSP, it can be downloaded as a standalone Mac or Windows application. Carla and I would also like to put it through a more extended testing process by inviting composers to submit 1-2 minute quarter-tone alto flute pieces which have been written with QTCheck’s assistance: these will be recorded and released online. The deadline for this call is 1st July 2018 – please see here for more details. Our hope is that the program will make the production of new pieces for the instrument which combine ambition with practicality more likely, and more easily achieved, than would otherwise have been the case.

Jonathan Pitkin was brought up in Edinburgh, and now lives in south London. He studied at the University of Oxford, the Royal Academy of Music, and on exchange at the Paris Conservatoire.See his British Music Collection Profile here