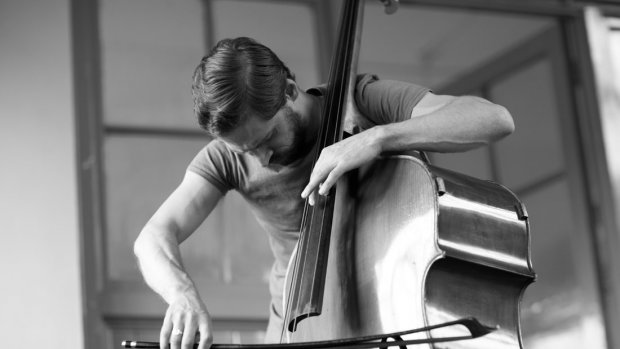 I recently had the opportunity to take part in a brief placement at Sound and Music as part of my undergraduate degree at Cardiff University. This has given me a fantastic understanding of the many facets of Sound and Music and allowed me to delve deep into the British Music Collection. To give you an insight into my time with the Collection, I wanted to spotlight a featured composer based in Cardiff, as well as someone who reflects my musical interests as a bass player.

Ashley John Long is a composer, researcher, and double bass player based in Cardiff. Much of his work is driven by creativity and spontaneity, exploring avenues such as jazz and free improvisation. This environment has allowed Ashley to craft his own voice not only as an instrumentalist, but also as a composer. His works are varied, encompassing works for full orchestra to solo bass, and always reflect a unique approach to sound and technique.

The above video is of Ashley performing a live improvisation at the Musique Libres Festival 2008 in Besancon, France. This clip showcases a number of features of his improvised works, with the most obvious being sheer virtuosity. He switches between extended techniques with absolute fluidity, creating sounds from the instrument few will have heard before. In our interview, Ashley commented that he will 'always try to ensure that extended techniques mean something; they have to have a musical purpose, something for the sake of effect is not enough' - an intention that is clear throughout the improvisation.

Ashley also discussed with me how the BBC Radiophonic Workshop inspired him to look at the manipulation of sound and possibilities of colour this created. Ultimately, this led him to explore similar avenues on the bass. By placing a mallet between the strings of his bass, Ashley is able to distort the timbre into something unnatural and nearly unrecognisable - not dissimilar to the work of composers like Delia Derbyshire, as well as echoing John Cage’s work with prepared piano.

The second movement from Ashley's work Hevelspending, recorded by the Lunar Saxophone Quartet, raises another point of interest. Ashley often writes with a particular ensemble in mind (Hevelspending was written specifically for the LSQ). This allows him to not only exploit the instrument, but also the skill set of the musicians, creating a cohesive listening experience.

Rhythmically, Hevelspending's second movement is noticeably static – with the harmony shifting in such a way that is almost unnoticeable if you’re not paying attention. This is a far cry from the other movements of Hevelspending - both characterised by their sense of vigour. With the second movement, a profound stillness is created; your attention drawn towards Ashely's choices of harmonic colour, which are then further compounded by the timbres used. The saxophones take on a string-like quality with slow attacks and sustained notes. Coupled with an often subtle vibrato, Ashley is able to form a delicate, yet constantly changing, texture.

Ashley's orchestral works have also been receiving attention. His piece Karri  was selected for BBC NOW's Composition: Wales 2019. The work was performed by the BBC National Orchestra of Wales, and conducted by B. Tommy Anderson. There is again a clear focus on timbre and sound throughout the extract, with any melodies being brief so as not to draw your attention away from the textures created. These textures constantly ebb and flow, mustering up a near constant feeling of unease.

Ashley has used his research as an opportunity to provide an insight into the paths he has taken as both a composer and performer. The research looks into contemporary performance practice and composition – with a clear focus on his approach to the double bass, and improvisation.

As part of his work, Ashley has produced ‘The Modern Double Bass’ as a resource intended to 'provide a reference point of double bass techniques designed for performers and composers so the latter can also get a sense of the practicalities and limitations of the techniques in question'. Born out of his fascination with technique, it is intended not only as a resource for performers, but also as a guide for composers. He is also currently working on his thesis, exploring how improvisation aids a composer in developing their own voice.

I'd like to finish by having a brief look at the track For Peter Reynolds, the centrepiece of Ashley's album for solo double bass 'Psi'. An interesting part of this work is the way in which it was recorded and performed. The bass was laid on its back, with contact microphones placed at 4 points: the bridge, the scroll, the end pin, and internally. These were then blended with the sound of the room to create the unnatural, eerie sounds heard in the track. Ashley also used multiple bows (up to 3 at a given time), further highlighting his desire to explore the limits of technique. Again, the influence drawn from the Radiophonic Workshop is clear, as the myriad of contorted and groaning sounds produced would fit perfectly in an episode of Doctor Who.

There is also significant influence from ambient composers such as Brian Eno. Much like Eno, Ashley creates an expansive soundscape that surround the listener, enveloping you entirely, making it easy to get lost and enter a near standstill - with it often being hard to believe you are listening exclusively to a double bass! Ultimately, this encapsulates much of what makes Ashley unique both as a composer and bassist.

I would like to thank Ashley and everyone at Sound and Music for all their help.

Aaron Harrex is a 2nd year undergraduate Music student at Cardiff University. He recently completed a two week placement at Sound and Music as part of his degree, where he spent time working with the British Music Collection. Aaron is also a keen composer of experimental music, and regularly performs as an Electric and Double Bassist.