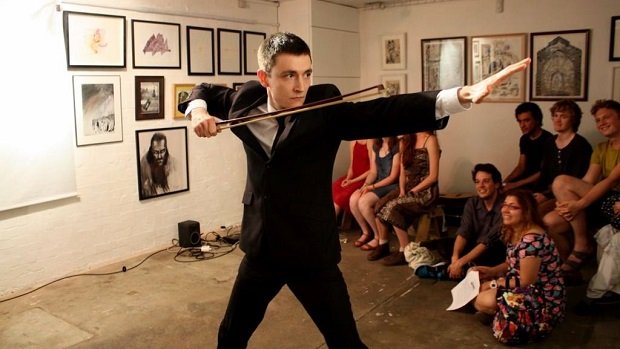 The first time I saw this piece was in my flat. I'd organised a 1960s Fluxus-style loft concert where anyone could come and show anything. We performed some animated scores by the king of animated scores, Ryan Ross Smith, some early Bastard Assignments, Matthew Lee Knowles did some Beckett off by heart, there were a bunch of other things which I have forgotten, and then Andy and Matthew did A performance is never rehearsed, a performance is never repeated. It was at a time where I was realising that you could be a composer without depending on massive institutions—be they orchestras, conservatoires, funding bodies, etc.—, that if you wanted to make art you could just do it, and this piece was emblematic of that feeling.

One of the things this piece does exquisitely well is use self-explanation as a compositional mechanism. What I mean by that is that the explanation of the piece is not an appendage that lies outside of it—in a programme note, say—but rather is the piece itself. Existing in/as a beautifully self-referential, circular and encapsulated design, it tells you what is going on as a matter of course. In that sense, it builds on some conceptual works of the 60s (such as Robert Morris's Music Box with the Sound of Its Own Making), whilst throwing in a reference to Chris Burden, delightfully down—(up?)—grading his rifle to two water pistols, and offering a personal glimpse of Andy himself ("Chris Burden, who is my favourite performance artist").

That openness runs deep in Andy's work, whether it involves him stripping the piece of any obfuscating facade, or him actually stripping naked to perform. In this case, the self-explanatory mechanism of the piece, much more than what some people might dismiss as a conceptual gimmick, allows it to communicate straight to the audience by exposing itself and letting them see through it. It reveals the layers that make it up, hiding nothing. It explains its own title, explains the action of the pistols, tells you the process through which it will go, and explains its overall structure. It draws the audience in, allowing them to make their own connections between the multiple levels that constitute it. Like much of Andy's work, it goes one step further than representing a score, instead making the act of reading the score part of its representation on stage.

At the same time, it manages to do this while being downright hilarious. Seeing somebody trying to read whilst being squirted in the face with liquid is simply a winner every time, as I realised when I performed the piece myself with Andy at The Crypt of St John on Bethnal Green; amidst eruptions of laughter from the audience, I struggled to retain my composure as my face dripped with lemon juice. The lemon juice we used was not the nice, natural organic kind you'd get from actual lemons, but rather the stuff synthesised from mysterious alphanumeric ingredients that you'd use to clean your dishwasher. Although afterwards I felt like my teeth were going to fall off as a result of critically low pH levels in my gums, in my first shot, I got Andy in the eye, which must have been really horrible. Sorry, Andy, and thanks for making a great piece.

Louis d'Heudieres is a London-based composer currently studying for a PhD at Bath Spa University. His work has been programmed all over the world at festivals and concert series ranging from the small and lesser-known to the internationally renowned, as well as being broadcast on national radio stations in the UK and abroad. On top of composing he teaches music in schools and curates new music events.