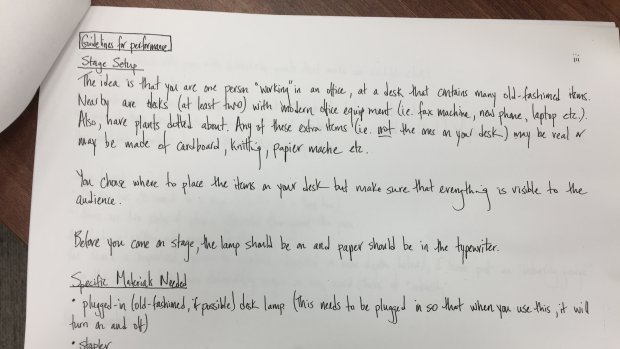 50 Things: Amber Priestley's 'Such Nights I Get All The Free Margins'

For our 50 Things series, Sound and Music's Angharad Cooper investigates Amber Prisetley's Such Nights I Get All The Free Margins (2007) #BMC50

As someone who is a good fit for the unpopular (but attractively down-to-earth?) term ‘arts administrator’, I couldn’t help but be drawn towards a score with the following performance guidelines while leafing through the British Music Collection’s enigmatically titled ‘Experimental’ box.

‘You are one person “working” in an office, at a desk that contains many old fashioned items. Nearby are desks (at least two) with modern office equipment (fax machine, a new phone, laptop etc.) Also have pot plants dotted about…’

I have occasionally found myself distracted by the nature of admin, gazing through my many open windows wondering what it all really means; the fleeting nature of all those carefully constructed emails, and the fact that, when at your most effective, your presence should probably go unnoticed. However, I’d like to think that we also become enablers and facilitators… hoping to make a meaningful contribution greater than the sum of our parts.

The title of Amber Priestley’s score ‘Such Nights I Get All The Free Margins’ (commissioned by SPNM in 2007) is taken from a line of prose by Walt Whitman. The score is based on Amber’s own experience. As she explains, ‘The subject matter is a sensitive individual enduring the tedium of the office. It is my most directly autobiographical piece; I had just finished a boring job working as a civil servant.’

All of Amber’s compositions feature varying degrees of open scoring - an attempt to allow the performer’s own individuality to shine through. The title of the piece is typed by performer repeatedly all the way through - the long pause heard early in the recording is the silence as the performer silently re-reads their work.

‘Such Nights I Get All The Free Margins’ was premiered by percussionist Damien Harron at Wapping Hydraulic Power Station, London, in March 2007 as part of the Wapping Project’s Solo Spotlight series.

‘With the sentiment of the stars and moon such nights I get all the free margins and indefiniteness of music or poetry, fused in geometry's utmost exactness.’

Excerpt from ‘Hours For the Soul’, from Walt Whitman’s collection of prose and diary entries Specimen Days.

The piece is also featured in Heritage Quay’s downloadable Music Resource pack which has been developed to introduce schools and home educated students to the musical collections in the University of Huddersfield’s archives.

Angharad Cooper is Creative Project Leader at Sound and Music, where she is project lead for the British Music Collection as well as New Voices artist residencies.

50 Things: Amber Priestley's 'Such Nights I Get All The Free Margins'