“I try to remember that making is fundamentally as natural as breathing.”

James Weeks provides an honest account of how he approaches composing
Spotlights: How I Compose

Having been composing since I was six, I now know for certain that I don’t know what I’m doing. This is scary, of course, but I’ve learnt to trust the feeling of being quite profoundly at a loss at certain stages of the writing process, as it often seems to mean I’m on the right track (as long as I can find a way to keep going). I don’t want to write what I already know or what I can already hear, I want to write to hear, and to experience, something new. That has to involve risking falling flat on your face, as my composition teacher used to say. You have to learn to welcome the anxiety, to know what to do with it.

More specifically, it’s a question of unlearning, of being ready always to let go of what you think you know. Of course I’ve acquired (cobbled together) some sort of technique (or at least experience), but that doesn’t guarantee anything - only offers the possibility of doing something. Technique isn’t something fixed, it has to be re-made, or at least re-purposed, at every moment, unless you want to re-write the same piece over and over again (I don’t). Perhaps I think technique is something the brain and hands do, to get things moving, since without moving there’s no making. Its actual application has to be contingent, simply how you do what you’re doing at the moment you’re doing it.

I try to remember that making is fundamentally as natural as breathing.

Ideally I would write every day, if only to keep compositionally fit – unfortunately that’s often not possible, but that’s how it goes. The point is to make the best of the time we have, whether we’re feeling fresh or exhausted (both can give interesting results). I think of Cage, warming his mind and hand up with automatic exercises to get himself going, and also of Stravinsky, telling an interviewer that he gets his ideas ‘when I’m working.’ Just being there, at the desk, doing something or thinking about doing something is a good start.

For several years I’ve found myself making more and more (complete) drafts of pieces. The first draft is often total garbage, but that doesn’t matter – I need stuff down on the page to be able to relax and start getting into the piece. This can take a long time, several drafts, but there eventually comes a moment when I feel completely into the work, into the material, able to be inside the music as it’s sounding in my head. I’ve learnt not to panic if this takes a long time to arrive – if it doesn’t ever arrive that’s probably a good thing, and then one can work back through the drafts to see where you made a wrong turning. This holistic way of working seems to suit me and the kind of music I want to make, even if it is quite labour-intensive.

I usually write a lot of words down when I start, rather than notes or sounds. It’s not that I don’t have notes or sounds, I have plenty, it’s more that I want to dig into the conceptual ideas of the work first so as to start things off in an interesting direction. The danger is in getting so far with verbal conceptualising that there’s no breathing-space for the music, no room for it to set off on its own trains of thought, at which point you have to let words go and let the music lead; this push-pull of music and verbal reflection/conceptualisation continues well into the composing process before the music finally takes over completely. Words won’t justify anything in the end.

But as I said, I don’t know anything for certain, much of the time I’m in the dark; what seems to work for one piece won’t work at all for the next. For example, the two pieces I’ve been working on alternately this year (2016-17) have needed radically different composing processes.

Firstly I’ve written a piece for EXAUDI, Libro di fiammelle e ombre, which is actually the second complete book of madrigals I’ve finished in a year. I wrote it very fast, drafting all twelve madrigals (each about two minutes long) in a fortnight, and then coming back to it in the Winter to redraft, which took another three weeks. This rapidity I think was due to the fact that its predecessor, Primo Libro, took four years to complete, and in fact both pieces began as the same project in 2012 before I later realised I was trying to force two conflicting ideas into a single piece. But certainly the writing of Libro di fiammelle e ombre was a kind of release from the tortuous progress of the Primo Libro, and to me it feels dangerously but excitingly intuitive and fluent. I’m nervous about how it will have turned out…have I taken the material somewhere interesting, strange, provocative? have I fallen into too obvious, familiar paths? does it feel open-ended, alive enough? Anyway I’m going with it, as I enjoyed writing it so much that I want to trust my instinct and hope that sense of creative pleasure comes through. We are allowed to relax occasionally, right? 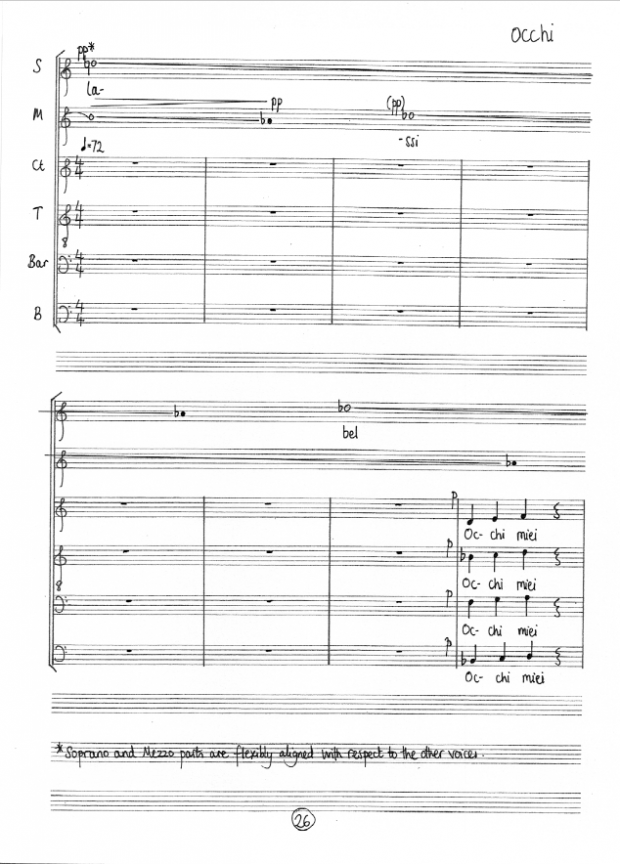 Section of the score for 'Libro di fiammelle e ombre'

The other piece, which I’m writing at present (February 2017) is a long piece for violin solo for Mira Benjamin. We decided that it would be good to try and make something exceptional in terms of duration, so it’s going to be one single span of an hour or so, with no separate movements or parts, no electronics, just a bit of amplification – just Mira, her body and her violin.

I’ve so far found this the hardest piece to get into for a long time. The combination of its length – requiring a different approach to temporality than in shorter works – and the single performer – precluding the kind of harmonic and textural strategies I often use – has made progress extremely slow, as I try and inch myself towards the point where I can grasp the whole piece as a totality for the first time. I’ve spent a lot of time with my wife’s spare violin, looking for sounds and combinations of sounds I can use, testing their possible extension in time and their succession and potential relationship to other materials. At times I’ve felt myself improvising the piece into being in a way that feels quite alien to me (though I do occasionally do cello gigs as an improviser and am not afraid of the directness of that way of working). Notation is another ongoing question: whether, how much, what and how to fix or leave open. 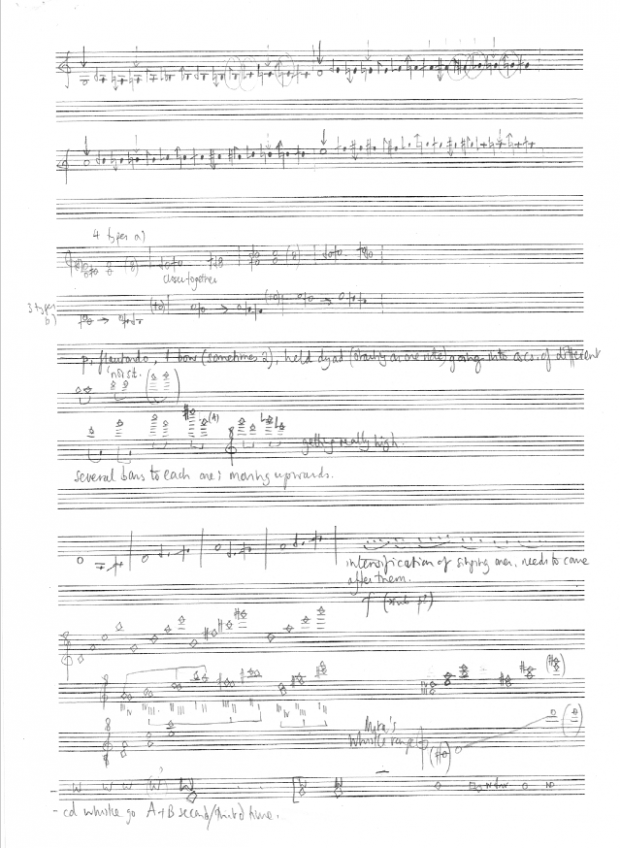 But the thing is that I’m not alone: I may be the composer here, but Mira’s role is equally important and equally creative. Work of this sort, a major piece for a very particular (and in this case deeply imaginative and sympathetic) performer, surely needs to be intrinsically collaborative, the result of a close creative exchange between composer and performer throughout the process. We’re meeting up for a series of working sessions over the next few months which will be crucial in bringing the piece to fruition.

Working on this with Mira (and indeed working on Libro di fiammelle with my long-term collaborators in EXAUDI) reminds me that composing is only one part of making music. It’s not a bad thing to step away from our solipsistic creative bubble and let the performers in, too. (Better still if those performers are ones we trust, ones we know, ones with whom we can become friends and build a close and lasting relationship rather than the arm’s length, one-night-stand model practised by most ensembles and institutions.) Eventually, music is nothing if not shared: all our solitary efforts leading to a communal act of creation undertaken together by composer, performers and listeners. 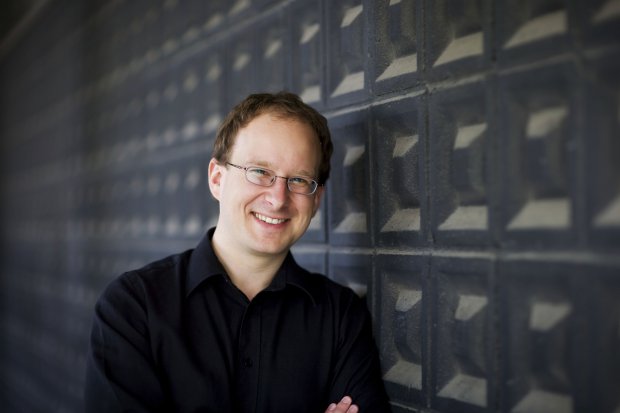 Four portrait discs of his work have been released: Mala punica/Walled Garden (Winter&Winter, 2017), TIDE (Métier 2013) mural (confront 2015), and Signs of Occupation (Métier 2016). His work can also be heard on the HCR and Wandelweiser labels.

You can find the new Mala punica disc here: http://www.winterandwinter.com/